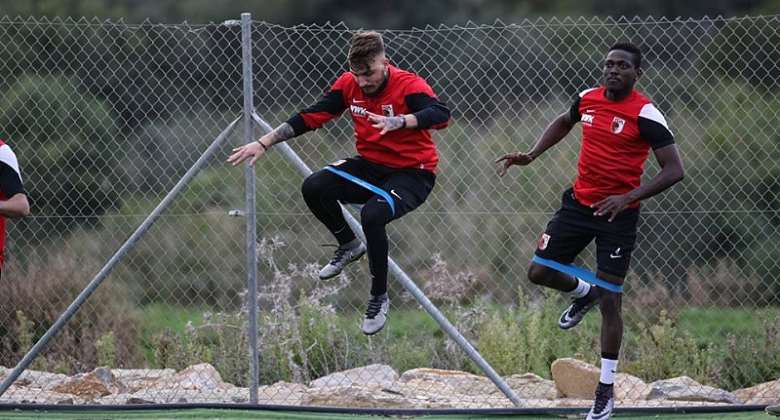 Daniel Opare, right, played for Augsburg in a friendly game on Tuesday

Ghana international defender Daniel Opare made his debut for German side Augsburg by coming off the bench to play in their narrow 1-0 win over Dynamo Dresden in a friendly encounter on afternoon.

The former Real Madrid Castilla defender, 25, moved to the Bundesliga side in the summer but has failed to beat competition to get first team playing time under his belt.

But on Tuesday when Augsburg took on the German Liga 3 side, Opare was introduced by Augsburg manager Markus Weinzierl handed the full-back some playing time by introducing him as part of second-half bulk substitutes.

In the first round of the Bundesliga season, Opare was able to make just a single appearance in the Augsburg first team as he warmed the bench in a 4-0 win against Stuttgart last November.

The former AshantiGold defender who played for Besiktas before his move to Germany will be hoping to increase garner some playing time when the Bundesliga resumes.

Augsburg signed Opare from FC Porto to replace Black Stars defender Baba Rahman who left to the Bundesliga side to join English Premier League title-holders Chelsea in the summer.