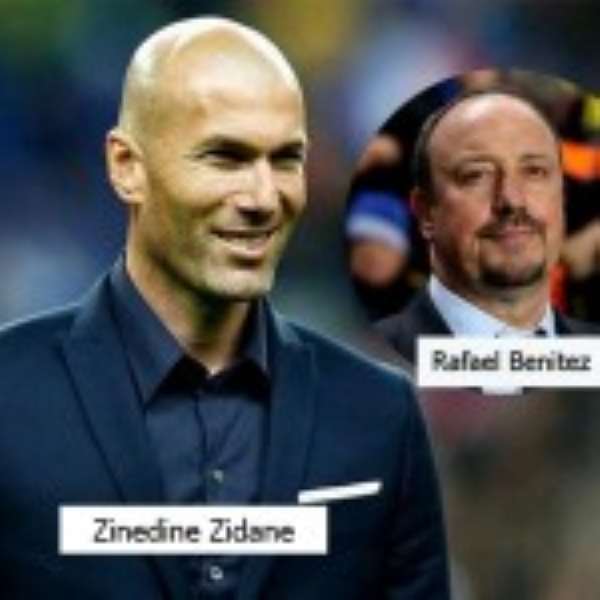 Spaniard Benitez, 55, was relieved of his duties following a meeting of the club’s board on Monday.

Real’s B team coach Zidane, 43, has been promoted to first-team boss.

The Frenchman, a former Real player and World Cup winner, said: “I am going to put my heart and soul into this job so that everything works out well.”

Zidane is the 11th coach to be appointed in Florentino Perez’s 12 years as club president across two spells. The length of his contract has not been made public.

His first match in charge will be Saturday’s home La Liga game against Deportivo la Coruna. Why sack Benitez?

Perez is yet to explain why the board of directors took the “difficult” decision to dismiss Benitez, who once coached the club’s youth teams.

Speaking at a news conference on Monday, he said: “Let me make clear that this is a great professional and a great person.

“I want to acknowledge the dedication of Benitez during his time as coach of Real Madrid.”

Benitez lost only three of his 25 games in charge of Los Blancos, but it would seem a combination of factors both on and off the pitch led to his downfall.

One was the 4-0 home defeat by Barcelona in the first El Clasico of the season in November. His defensive tactics were also criticised,   while there were reports of a rift with star forward Cristiano Ronaldo.   The right replacement?

For a man with no experience of managing at the top level, Zidane’s appointment could be considered a risk – but he has long been seen as a future Real boss.

Zidane has been coach of the club’s B team – who are second in the Spanish third tier – since 2014. Prior to that he was an integral member of the backroom staff under then Real boss Carlo Ancelotti, who led the team to ‘La Decima’ – the club’s 10th European Cup.

During his playing career, the Frenchman was one of Real’s key ‘Galacticos’ – a label given to the expensive players signed by Perez during his first spell as president in the early to mid-2000s.

In 2001, Real paid Juventus a then world record fee of £45.8m for the midfielder, who had already won the World Cup and European Championship.

At the Bernabeu, he played alongside players such as Luis Figo, Raul and Ronaldo, and also featured in the same midfield as England captain David Beckham.

In the five years before his retirement, he helped Real win the league in 2003 and was named Fifa world player of the year for a third time.

But perhaps his defining moment came during the 2002 Champions League final, when he scored a stunning volley against Bayer Leverkusen at Hampden Park.