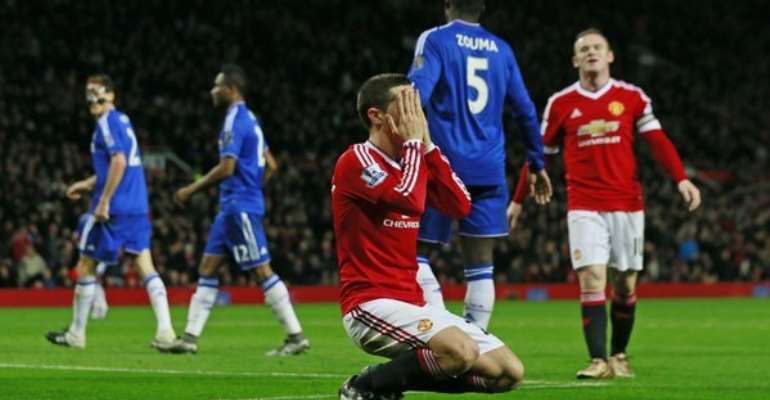 Manchester United put in an improved display against Chelsea but Louis van Gaal's side were unable to find the back of the net in a 0-0 draw at Old Trafford.

United, whose manager Van Gaal has been under intense pressure, enjoyed the better of the first half with Juan Mata and Anthony Martial both seeing efforts bounce back off the woodwork.

In the second half, David De Gea made a superb save to deny Pedro before up the other end Thibaut Courtois somehow kept out Ander Herrera's close-range shot.

Chelsea then had a golden chance to open the scoring as they broke from a corner, but Nemanja Matic was guilty of a horrendous miss as he blazed over when through on goal.

The draw ended United's four-game losing streak in all competitions, though Van Gaal's side are still without a win since Nov. 21, a span of eight games -- six in the Premier League and two in the Champions League.

Arsenal climbed above Leicester to go top of the table as they saw off Bournemouth 2-0 to bounce back from their 4-0 Boxing Day loss at Southampton.

Ozil then got his name on the scoresheet after playing a one-two with Olivier Giroud and then nudging the ball past goalkeeper Artur Boruc, putting the Gunners above Leicester who play Manchester City on Tuesday.

Spurs went in front on 17 minutes following a mix-up in midfield that allowed Erik Lamela to pounce and slip the ball beyond goalkeeper Heurelho Gomes.

Odion Ighalo scored for a sixth top-flight game in a row to make it 1-1, showing good strength before prodding the ball past goalkeeper Hugo Lloris.

Watford were reduced to 10 men on 62 minutes after a high challenge by Nathan Ake on Lamela.

Tottenham clinched all three points when Son backheeled through Gomes' legs with a minute of normal time remaining.

Stoke took the lead in the 16th minute when Arnautovic squared for Xherdan Shaqiri, who found the corner to beat goalkeeper Tim Howard.

Everton hit back just six minutes later with Romelu Lukaku scoring his 10th goal in as many games in all competitions thanks to James McCarthy's smart assist.

The visitors retook the lead just before half-time with Shaqiri netting his second of the game, half-vollleying in a superb effort that looped over Howard.

It was 2-2 in the 64th minute when Lukaku grabbed his second of the game, Tom Cleverley finding the Belgian who made no mistake with a powerful finish.

Everton went in front thanks to Gerard Deulofeu, who slotted in from Ross Barkley's square pass.

Stoke responded when Joselu came off the bench to make it 3-3, thumping in a loose ball after Arnautovic's cross was not dealt with.

A dramatic winner came for Stoke when Arnautovic was brought down in the box by John Stones, with the Austrian scoring from the spot.

Norwich City condemned bottom-of-the-table Aston Villa to a 13th league defeat of the season as the Canaries triumphed 2-0 at Carrow Road.

Jonny Howson broke the deadlock on 24 minutes with a volley at the back post after Villa failed to clear Nathan Redmond's cross.

The points were sealed by Dieumerci Mbokani who nodded in from Wes Hoolahan's delivery with three minutes left on the clock.

Darren Fletcher was the match-winner for West Brom as they beat Newcastle United 1-0 at The Hawthorns.

After Paul Dummett and Victor Anichebe had hit the woodwork for both sides, West Brom finally broke the deadlock in the 78th minute via Fletcher following Claudio Yacob's cross.

Andy Carroll helped West Ham United record a 2-1 victory as the Hammers came from a goal down to beat Southampton at Upton Park.

Southampton went in front on 13 minutes when Dusan Tadic's shot from close range deflected in off Hammers defender Carl Jenkinson.

West Ham levelled in the second half when Victor Wanyama's clearance bounced off Michail Antonio and beyond goalkeeper Maarten Stekelenburg.

The turnaround was completed with 11 minutes left when Carroll headed in a rebound after Antonio's initial effort had hit the bar.