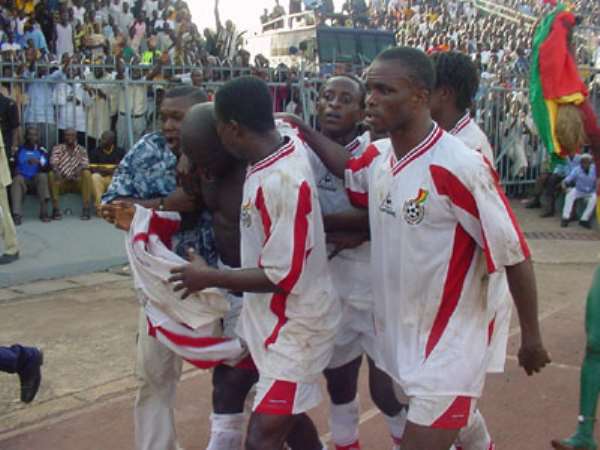 Live commentary on www.myspacefm.com Ghana and the Congo Democratic Republic are in confrontation in what is a top-of-the-table clash in Kumasi's Asokwa Stadium tomorrow afternoon. Both teams are perched at the top of Group Two with seven points each, the Black Stars leading by goals difference. Burkina Faso and South Africa chase them with six points each, while Cape Verde and Uganda are both on four points at the rear. In essence, only one point separates the top-placed team from the fourth-placed side. It is a delicate pool and any team that takes its chances would be the one to be 'called to the Kingdom". Ghana navigated a stressful summer, with first, the departure without notice of Portuguese coach, Mariano Barreto. Barreto flew out of Accra after leading the Ghanaian U-23 side, Black Meteors, to first-stage elimination at the Athens Olympics and the Stars to a 2-0 defeat of Cape Verde in the last round of the campaign. Barreto then claimed he was hounded by the media and other pressure groups in the country and preferred to join a second division club in his homeland rather than confront unfulfilled promises, media flaying and insincere administrators in West Africa.
The country's administrators spent significant period of time protesting to FIFA and seeking compensation from Barreto for breach of contract. But they were called back to their senses and appointed local hero, Sam Arday to the post for the game against the Simba.
On Sunday, the Black Stars will once more be led out by Stephen Appiah as apprehension governs the Kumasi cauldron. Ghana are the most successful African footballing nation not to have played at the World Cup. With their present leadership position and a home game, Ghanaians will expect much and pressure is bound to be thick on the boys to deliver.
Appiah, a member of the 'golden young generation' of the mid 90s, plays his football for Juventus in Italy. There will also be Michael Essien from Lyon in France, who scored one of the goals when Ghana beat Cape Verde to reach the top of the standing last month.
An exciting afternoon is anticipated in Ghana's second major city as Coach Arday unleashes returnee star defender, Samuel Ossei Kuffour, Appiah, Essien, Bernard Don Bortey, Emmanuel Pappoe, William Tiero and Charles Taylor on the Simba. Coach Claude Leroy has dispensed with Lomana Tresor Lua Lua for his failure to turn up for the last qualifier at home to South Africa.
In other matches, Congo's Red Devils are at home to deal the short hand to Kalusha Bwalya's Zambia, who are third on the Group One table, though on the same seven points as Togo and Senegal.
Congo have won their two home matches and French coach, Christian Letard is pursuing a place at the Nations Cup for his Devils, who missed Mali 2002 and Tunisia 2004. Zambia have not been able to win away, losing in Senegal and drawing in Mali.
The other match in Group One is between Liberia and Senegal, taking place at the Paynesville in Monrovia.
It's a game Senegal can win against one of the least inspired teams in the campaign.
Tomorrow also, Uganda's Cranes, 1978 African Nations Cup runners-up, host 1996 champions, South Africa, at the National Stadium, Kampala. South Africa lost 1-0 to DR Congo last month and might have compromised their World Cup ticket pursuit.
Cape Verde are at home to Burkina Faso's Etalons in the last match of Group Two.
Egypt were to have visited Libya last night in Group Three, while Benin Republic host leaders, Cote d'Ivoire and Sudan are at home to Cameroon in the other sessions.
Cameroon are in third place, though with the same seven points as second-placed Egypt and fourth-placed Libya. Cote d'Ivoire have nine points and are likely to snap up all three when they take the pitch against the Squirrels at the Stade L'Amitie tomorrow afternoon.
The last match in Group D is between Algeria and Rwanda, coming up in Kigali this afternoon. It's a dreadful session for the Fennecs, who must be apprehensive at another Central African opposition so soon after an inexplicable 3-0 home loss to Gabon brought their football to the lowest pit.
African champions, Tunisia, are away to bottom-placed Malawi in Blantyre in Group Five, while Botswana host Kenya's Harambee Stars in Gaborone.