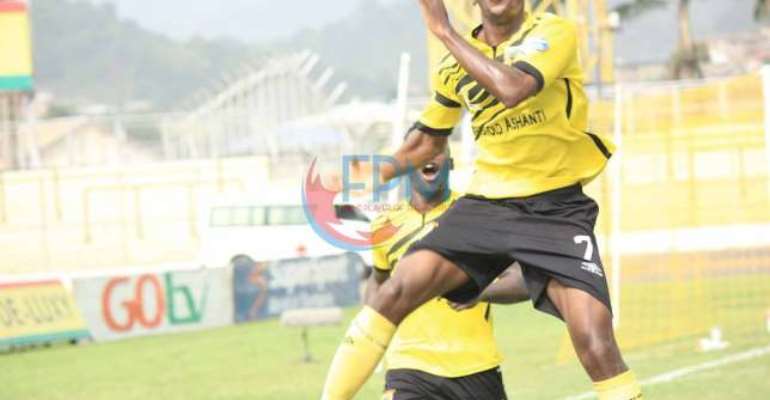 AshantiGold continued to stretch their lead at the top of the First Capital Plus Premier League table as close chasers Aduana Stars faulted at Bechem.

Forward Yakubu Mohammed's ninth minute penalty strike was enough for the Miners to seize all three points at home from All Stars on match day 17.

WAFA SC were held at home by Inter Allies as Evans Mensah equalized a Zakaria Mumuni 11th minute opener. The  Academy side however move to tie with Aduana on 26 points.

At the Carl Reindorf Park, Liberty Professionals emerged victors in a five-goal thriller with Heart of Lions. The visitors went ahead twice but got pegged back on both occasions by midfielder Kennedy Ashia who went to grab a hat-trick. Badu Asiamah and Prince Acquah scored both goals for Lions.

Berekum Chelsea further deepened the woes of bottom-placed B.A United as they posted a 2-0 victory over their regional rivals at the Golden City Park on Sunday. Kofi Owusu found the opener in the 62nd minute before Latif Salifu put the game beyond the visitors with his strike two minutes from full time.

The Western derby produced no goal as Medeama SC and Sekondi Hasaacas took home a point each from the T&A Park in Tarkwa.

Hearts of Oak snatched an important win over city rivals Great Olympics courtesy a 21st minute strike by Togolese forward Foovi Aguidi. The Phobians now have 24 points and move up the ladder to 7th position.   On Friday, New Edubiase United travelled to beat league holders Asante Kotoko 2-1 at the Baba Yara Stadium with goals from Fuseini Nuhu and Bernard Danso. Centre-back Ahmed Adams scored the consolation for the porcupine warriors.