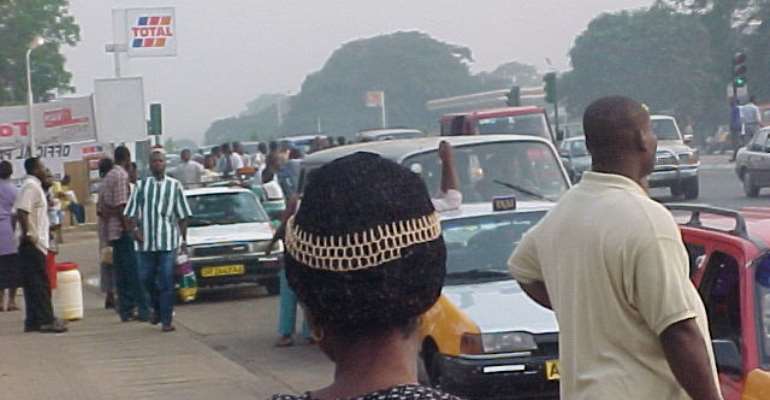 IN ACCRA and other regional capitals, it is pathetic to see how people suffer during the peak rush hours as they struggle to board vehicles to and from work.

Especially in Accra, during both the morning rush hour, when people are coming to work and in the evening after work when they are going home, the various bus stops at the lorry parks are nothing more than places to observe what tough times the ordinary Ghanaian goes through simply to get a vehicle.

At the transport hubs such as Tema Station, Nkrumah Circle, Kaneshie and 37 Military Hospital, the struggle for public transport becomes a battle royale in which no holds are barred and the difference between the sexes simply evaporates into nothingness.

Indeed, any observer during these violent struggles to board the few vehicles available would think the passengers were going to pick up pots of gold at the end of the journey and not simply going to work or to their various homes after work.

The transportation situation is so acute that the buses brought from Italy and China for the Metro Mass Transit have hardly made a dent on the huge transport problems facing the city dwellers.

The simple fact is that the buses seem to operate during working hours but mysteriously disappear at peak rush hours when they are needed most.

One reason for this discrepancy is the way our roads get choked with traffic during rush hours.

The congestion gets so bad that a normal in-and-out trip that should take half an hour eventually takes an hour and a half or even more. In the absence of effective laid-out bus lanes on our urban roads, the public transport buses have to hustle just as other vehicles, thus leading to interminable delays.

It is not uncommon for people to close from work at five o'clock in the evening and arrive at home three to four hours later, tired and crushed to the bone. This sorry procedure repeats itself in the morning, day in and day out, all through the year. Obviously, such trials and tribulations over simple transport are bound to affect workers adversely since the psychological pressure that piles up on them eventually becomes unbearable.

The Chronicle believes that the provision of buses alone will not solve the huge transportation problems that many people face every day before earning their daily bread. The fact is that, considering the rapid population increases, as a result of the rural drift to the urban centers, the cities, especially Accra and Kumasi have been so bloated that the infrastructure can no longer cope.

Had we the resources, perhaps we would have constructed underground mass transport systems as other cities have done elsewhere in the world. Even though that system may be out of our reach now, we believe an alternative can be found by constructing an inner city overland railway that will carry people from the outlying suburbia into the central business district.

An existing prototype of such a system can be seen in the Nsawam to Accra rail-line, which has been the saviour of many workers and traders who live in the suburbs the line passes through. Many workers are still in employment due to this lifeline that the railway provides them.

We hope that when the railway sector is revamped under the intended upgrading which is being planned, this system will be improved so that people can be spared the trauma of struggling to simply find transport to go to work and come back home safely in one piece.

We believe that things like these, though they may appear inconsequential, are the basis on which political allegiances are built. When the average worker and self-employed trader realize that their interests are being taken care of, they will reciprocate by voting to keep the government in power so they can carry on the good work.

Ad-hoc solutions would simply be scratching at the surface of the problem. We need long-term and permanent solutions. A visit to the yard of the Omnibus Services Authority (OSA) will demonstrate our point.

Already, many of the ostensibly new buses have broken down and are sitting idly in the yard. When will we ever learn?