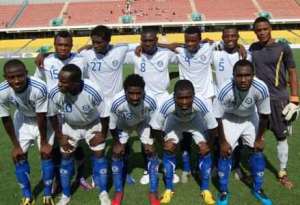 Berekum Chelsea have moved up to 4th in the First Capital Plus Premier League following a lone goal victory over Accra Great Olympics on Wednesday afternoon.

The former Ghana champions struck in the first half at the Berekum Golden City park and it proved decisive as Chelsea held on to secure their third victory in five games of the new campaign.

Chelsea's nine points put them up to fourth on th league log behind leaders, Ashantigold (12) as well as Sekondi Hasaacas and Aduana Stars who have 10 points each from the same number of games.

Olympics however suffer a 4th defeat in 5 games and remain rooted to the bottom of the log on a mere 3 points in their return season back into Ghanaian top flight football.

Chelsea next travel to Tarkwa on Saturday to face the might of Medeama SC when Olympics hope to arrest their poor start at home to Hasaacas at the Accra Sports Stadium. Follow @thedonplato

We’re Investing Massively In Infrastructure; Not Rearing Fly...
19 minutes ago

Mahama Shakes Tarkwa As Menzgold Customers Give Him Rousing ...
19 minutes ago