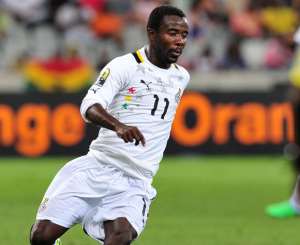 Ex-Medeama winger Theophilus Anobaah, has confirmed he is close to sealing a move to Egyptian side Ismaily

The 2014 CHAN stars has been in the bad books of Medeama resulting in the club suspending him indefinitely.

Anobaah was  peeved to see a lucrative move to Petrojet scuffed at the last minute as Medeama refused to bow insisting Anobaah wanted to play a fast one on them.

But all seem clear now with the club releasing a statement that they have agreed to sell the visible talented winger for good.

“It's true that I have been in contact with Ismaily and we are working on something hopefully it all goes well and I am able to get back to playing football,” Anobaah told Ghanasoccernet.com

“Every players wants to be on the pitch and I am grateful to God that finally this chapter is coming to an end.”