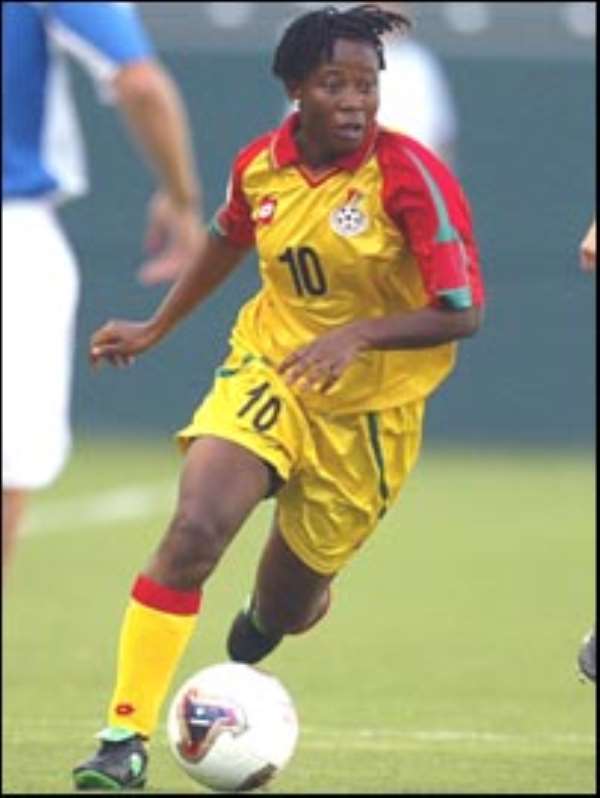 Accra, July 13, GNA - The Confederation of African Football (CAF) Female Player of the Year, Adjoa Bayor has landed a permanent contract with the female team of German-based Hamburg SV. The German club according to information gathered by the GNA Sports has expressed interest in signing on the player for a permanent contract when they presented their bid to her local club, Ghatel Ladies a few weeks ago. Bayor who recorded a hat trick in the Queens African Women Championship qualifier against Guinea in Conakry on Sunday is scheduled to travel to Germany after the return second leg game billed for Accra in two weeks time. The midfielder, who has 42 caps with 25 goals to her credit, will emerge as the first Ghanaian female player to have featured in the German league if the deal succeeds.
The Ghatel Ladies star is expected to travel in the company of a Ghana Football Association (GFA) official to assist her in arriving at favourable negotiations for the player who has been tipped by the club to solve its midfield problems.
The former Robert Morries genius will undergo medicals whilst in Germany.
The 25-year-old dribbling wizard was thrilled about the contract when talent and the cream of Africa soccer whilst in Germany. I am hoping to impress so as to open the doors for other Ghanaians", She added. Bayor expressed her desire to play football at the highest level "where I will be counted among the greats and will be called an idol".
Currently among the senior players in the Black Queens camp, the midfield dynamo believes the time has come for African female players to get the necessary exposure that will put them in equal domain as the likes of Bright Prinz, Mia Hamm and Abbey Wamback among others.
The player's performance in the last World Cup in the United States attracted the attention of the German scouts who followed the Ghanaian players in all of their three games played at the preliminary stages of the competition.
Bayor did not only emerge as the brightest spot in the Queens set-up, but she was the Most Valuable Player (MVP) in their last group game against Australia where Ghana chalked her first victory at the World Cup with a 2-0 win. 13 July 04