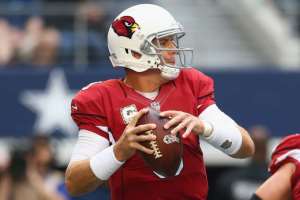 The 34-year-old joined the Cardinals in a trade with the Oakland Raiders in 2013 and is enjoying a fantastic season with the NFC West leaders, who hold the NFL's best record having won seven of their opening eight games.

Palmer, who has missed three games this season due to a right shoulder injury, is a perfect 5-0 as a starter in 2014, throwing for 1,385 yards and 11 touchdowns with just two interceptions.

And the former Cincinnati Bengals signal-caller has been rewarded with a deal believed to be worth $50million, which will keep him with the Cardinals through the 2017 season.

"Carson has played at an incredibly high level and has been a huge part of the team's success," general manager Steve Keim said in a statement on the Cardinals' official website.

"When you combine his on-field performance with the leadership, stability and professionalism he brings to our team, there was no question that we wanted to extend the relationship and we are excited he felt the same way."

Arizona will attempt to stretch their winning streak to five games when they take on divisional rival St Louis Rams on Sunday.