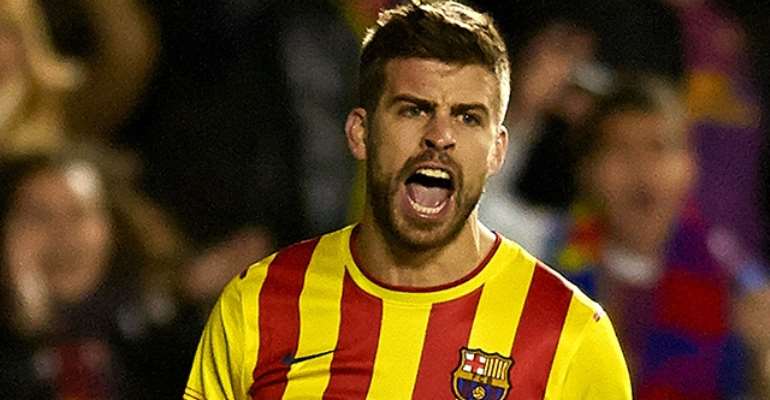 Barcelona defender Gerard Pique, 27, was left out of the starting line-up for the second successive game amid speculation Chelsea, Arsenal and Manchester United have submitted offers for the Spain international.

(Daily Mail)
Kevin Strootman, 24, is expected to make his long-awaited return to action for a Roma reserve team this weekend in a move that could boost Manchester United's prospects of signing the Netherlands midfielder in January.

(Times – subscription required)
Despite being linked with a host of players, United manager Louis van Gaal is not planning to strengthen his squad in January unless a key target becomes available.

(Guardian)
Forward Joel Campbell, 22, is ready to leave Arsenal in January after becoming fed-up at a lack of first-team chances.

(Daily Mirror)   OTHER GOSSIP
Leicester City assistant manager Craig Shakespeare has denied talks have taken place with midfielder Esteban Cambiasso, 34, over extending his contract, which expires at the end of the season.

(Leicester Mercury)
Could David Moyes be on the verge of a return to management?

Barcelona forward Luis Suarez, 27, says he does not know how former Liverpool team-mate Steven Gerrard, 34, managed to play on after his costly slip against Chelsea last season.

(Daily Mirror)
Roy Hodgson is ready to hand Theo Walcott an England recall, despite the 25-year-old Arsenal forward having played just 10 minutes of football in more than nine months.

(Daily Telegraph)
Thursday's Sun back page
Real Sociedad say they are talking to former Manchester United and Everton boss David Moyes about the managerial vacancy at the Spanish club.

(Guardian)
Former Liverpool manager Roy Evans reckons forward Raheem Sterling must go back to basics as the 19-year-old looks to regain his form.

(Talksport)
Birmingham City director Panos Pavlakis says the club is in a “much safer” position financially than previously.

(Birmingham Mail)
FCM Targu Mures midfielder Gabriel Muresan, 32, has been given a 16-match domestic ban for a violent tackle during a Romanian league match in October.

(Guardian)
Damien Comolli says he was sacked as Liverpool's director of football because the owners did not approve of the £20m signing of midfielder Jordan Henderson, 24.

Manchester City midfielder Yaya Toure took to
Twitter
to apologise to the club's fans for his red card in Wednesday's 2-1 Champions League loss at home to CSKA Moscow.

Former England striker Michael Owen
tweeted his frustration
on a flight from Los Angeles to Heathrow after it was diverted to Manchester because of fog. Owen's ultimate destination was Manchester but the airline wouldn't allow him to leave the plane. Because of the delay before it flew to Heathrow, he missed his connecting flight back to Manchester.

Tickets for Troops
campaign which provides free matchday passes to members of the armed forces over Remembrance Weekend.