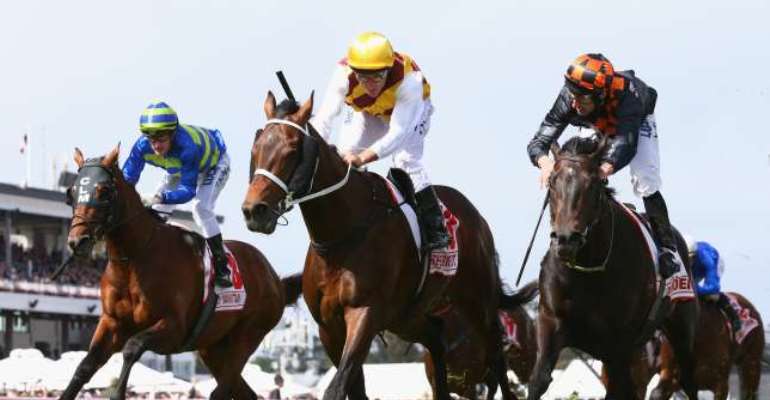 The Gai Waterhouse-trained Hampton Court was the overwhelming favourite to take out the 2500-metre race but champion jockey Damien Oliver had other ideas as he guided Preferment to victory and the $1.5million Australian dollar prize cheque in Melbourne.

Preferment powered home in the final 200m to edge out Bondeiger and Nozomi in the feature race.

Light Up Manhattan came from the back of the field to take fourth.

Preferment - the three-year-old colt trained by Chris Waller - became the first maiden to win the Derby since Redding in 1992.

It was also a fifth Victoria Derby triumph for Australian jockey Oliver, who received plenty of praise for suggesting winkers instead of blinkers.

"He gave me a lot of feedback, which was invaluable," Waller said.

"He wound up a long way from home. He's a genuine stayer."

The win capped off a successful day for both Waller and Oliver at Flemington.

The five-year old - with Joao Moreira aboard - was too strong for Big Memory and La Amistad.

You're A Covenant Keeping Leader — Ahafo Chiefs To Akufo-Add...
38 minutes ago