40 years ago today: Ali defeats Foreman in famous 'Rumble in the Jungle' 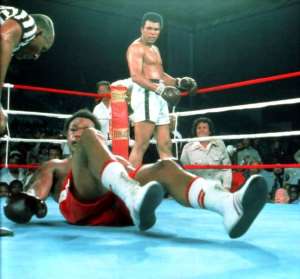 Forty years have passed since the Rumble in the Jungle, the night when Foreman went toe to toe with Muhammad Ali for the biggest prize in the sport, the world heavyweight boxing championship in Zaire.

On October 30, 1974, 32-year-old Muhammad Ali becomes the heavyweight champion of the world for the second time when he knocks out 25-year-old champ George Foreman in the eighth round of the "Rumble in the Jungle," a match in Kinshasa, Zaire.

Seven years before, Ali had lost his title when the government accused him of draft-dodging and the boxing commission took away his license. His victory in Zaire made him only the second dethroned champ in history to regain his belt.

The "Rumble in the Jungle" (named by promoter Don King, who'd initially tagged the bout "From the Slave Ship to the Championship!" until Zaire's president caught wind of the idea and ordered all the posters burned) was Africa's first heavyweight championship match.

The government of the African country staged the event—its president, Mobutu Sese Seko, personally paid each of the fighters $5 million simply for showing up—in hopes that it would draw the world's attention to the country's enormous beauty and vast reserves of natural resources. Ali agreed.

"I wanted to establish a relationship between American blacks and Africans," he wrote later. "The fight was about racial problems, Vietnam. All of that." He added: "The Rumble in the Jungle was a fight that made the whole country more conscious."

The ex-champ had been taunting Foreman for weeks, and the young boxer was eager to get going. When the bell rang, he began to pound Ali with his signature sledgehammer blows, but the older man simply backed himself up against the ropes and used his arms to block as many hits as he could. He was confident that he could wait Foreman out. (Ali's trainer later called this strategy the "rope-a-dope," because he was "a dope" for using it.)

By the fifth round, the youngster began to tire. His powerful punches became glances and taps. And in the eighth, like "a bee harassing a bear," as one Times reporter wrote, Ali peeled himself off the ropes and unleashed a barrage of quick punches that seemed to bewilder the exhausted Foreman. A hard left and chopping right caused the champ's weary legs to buckle, and he plopped down on the mat. The referee counted him out with just two seconds to go in the round.

Ali lost his title and regained it once more before retiring for good in 1981. Foreman, meanwhile, retired in 1977 but kept training, and in 1987 he became the oldest heavyweight champ in the history of boxing. Today, the affable Foreman is a minister and rancher in  Texas  and the father of five daughters and five sons, all named George. He's also the spokesman for the incredibly popular line of George Foreman indoor grills.