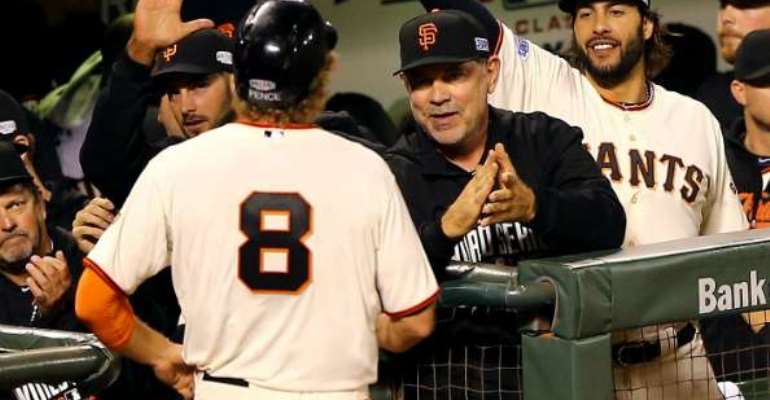 Bochy's men were looking down the barrel of a 3-1 series deficit to fellow post-season wildcards the Kansas City Royals, as they trailed Saturday's encounter 4-1 midway through the third inning.

But some stunning Giants offense and defense saw them eventually canter to an 11-4 win to square the MLB's championship series at 2-2.

Of the 12 players to have an at-bat for the National League champions, 11 had base hits - with Hunter Pence (three) leading the way while Pablo Sandoval, Joe Panik and Gregor Blanco also had multiple hits.

"You hear the term 'team win'," Bochy said.
"It's used quite a bit, but if you look at that game, everybody did something to contribute, from the bullpen to the hitters, pinch-hitters, [Matt] Duffy, big hit, he scores. [Joaquin] Arias [too].

"All these little things added up for us mounting that comeback, a great comeback."

Bochy said his side's ability to scratch their way to victory having been hit-less heading to the bottom of the third with a 4-1 deficit was extraordinary.

"It's obvious we think it's a great game. These guys fought hard. I mean, they scratched and clawed to get back in it," Bochy said.

"You know, you get down against this club [the Royals] and that bullpen, you have your work cut out. But these guys didn't stop fighting."

Sandoval, who hit the go-ahead two-run single, conceded he was feeling ill 24 hours from game four, but got himself up for the clutch base hit for his team-mates.

"As I said it was a tough moment to be sitting on the bench, I just told myself you have to go out and play with aspiration ... I just tried to tell myself, 'You're the guy. Step up for your team-mates. You try and get a base hit out there and score two runs'."

Sandoval said the Giants were buoyed by the fans, who are spurring on their team for a third World Series win in five years.

In even better news for San Francisco, star pitcher Madison Bumgarner is set to start game five - and is poised to give the Giants a series lead heading to game six in Kansas City.

"It is a big difference to win. Tomorrow [Sunday] there's going to be another game," Sandoval said.

"We're going to play hard for the fans, they enjoyed this moment.

Teachers Are Better Off Under NPP Than NDC — Education Minis...
46 minutes ago

COVID-19 Still With Us, Follow Protocols – Okoe Boye To Ghan...
54 minutes ago