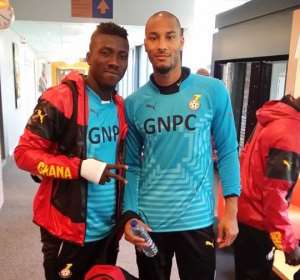 By Akyereko Frimpong Manson
Follow Akyereko on Twitter: @ AkyerekOfficial
Ghana goalkeeper Stephen Adams has hinted he would be on his way out of Aduana Stars as interest around him builds.

The 25-year-old has been linked a move away from the Ghana Premier League side to rivals Hearts of Oak and Asante Kotoko but he has remained at the Fire Club for the upcoming season.

Despite failing to secure a reported move to Asian and Hearts of Oak pulling out the deal to sign him, Adams has revealed he will be leaving Aduana sooner than later.

“It is no secret that both local and foreign clubs are vying for my signature but am still loyal to a Aduana stars.It will not take me long because I believe sooner than later I will get the right deal and joined my others colleagues in Europe,” he said.

Adams has taken over the first choice gloves in the Black Stars after Fatau Dauda fell down the pecking order and Norwegian-based Adam Kwarasey opting out of the squad for the double-header against Guinea last week.