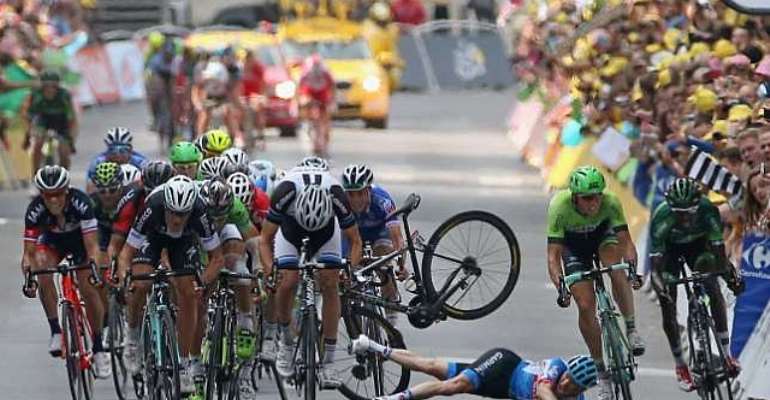 The Garmin-Sharp cyclist went down in the sprint finish of the 234.5-kilometre seventh stage from Epernay to Nancy, after making contact with Australia's Gerrans.

Cyclingnews reported Talansky let Gerrans know of his displeasure, and also exclaimed to team chiropractor Matt Robin: "He took me, he can't do that. Do you think that's acceptable? I was pulling out the way and he took me down."

Gerrans later said while he was "sorry" for the incident, he believed it was an accident.

"I am sorry Talansky crashed, I think he fell over my back wheel there in the final 100 meters or so," Gerrans said, as reported on Orice-GreenEDGE's website.

"I think when you watch the footage there was absolutely nothing intentional about it.

"I don't think either of us did too much wrong it was just an unfortunate thing that happened under the circumstances."

Gerrans, who wore yellow for two days in the 2013 Tour, is over 20 minutes behind leader Vincenzo Nibali, but he said he felt he was improving as the 2014 race wore on after an early setback.

"Today was a stage that I was targeting since before the Tour started," Gerrans said.

"It was going to be a little touch and go how I pulled up after my crash on the first stage.

"Physically I am feeling a lot better now and today was a good indication that it is all coming around so fingers crossed for days to come."