Kotoko Not My Target …Sabahn Quaye 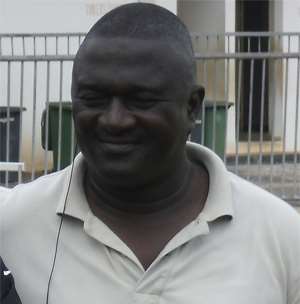 Sabahn Quaye
Football administrator Sabahn Quaye has stated categorically that defeating Kumasi Asante Kotoko is not the reason for his return to Accra Hearts of Oak.

There are speculations that Sabahn Quaye returned to the Hearts team manager position mainly because of Kotoko.

Reports say he has the recipe to Hearts' problems, particularly on how the Accra-based team could defeat archrivals Kotoko, hence his return to Hearts.

Sabahn Quaye, in an interview stated that Kotoko did not influence his decision to return to Hearts.

'I am not at Hearts of Oak today because of Kotoko,' he stated categorically, adding that no club in the country is his target.

He said he has returned to Hearts, his mother club, ostensibly to help the Accra-based club rise from its slumber.

Sabahn Quaye said his only wish is that Hearts would return to their old glory days when the club dominated the local league and Africa.