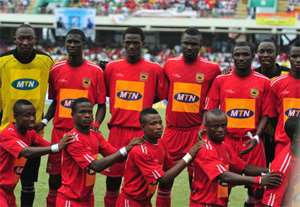 Asante Kotoko players
Ahead of the 2014/15 First Capital Plus League, defending champions Asante Kotoko are planning to tour Spain, a club source has indicated.

This season's tour is the club's third, having toured Germany in 2007 and Serbia two years ago when Dr Kofi Kodua Sarpong was in charge.

The Porcupine Warriors are in talks with travel and tour firm Inter-World Travels regarding travelling arrangements, but are yet to confirm the exact date for departure.

'This programme in Spain will be helpful as the technical team will be looking at putting the team in the right shape before the football season opens.'

Kotoko, having won the top flight league for the last three successive seasons, are targeting a fourth straight title.

They preceded last season's league with a camp in Tamale and rounded it up in the southern part of the country.