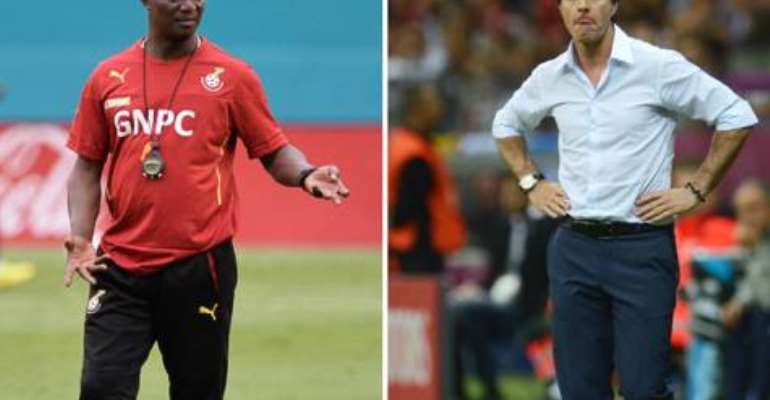 Germany will be hoping history doesn't repeat itself when they tackle Ghana in their second World Cup Group G match at Fortaleza on Saturday.

Historically, the Germans have a tradition of winning their opening group match at World Cup finals, only to struggle in their second game.

At the 1994, 1998 and 2002 World Cup finals, they drew their second matches, piling on the pressure for the final group game in order to qualify.

They endured a nervy 1-0 win over Poland in 2006 but four years ago they suffered a shock defeat to Serbia in their second match.

It left the Germans needing to beat Ghana in their final group match and memories of that nervy night in Johannesburg, when a Mesut Ozil goal put them through, still linger.

“That's warning enough for us,” said Arsenal centre-back Per Mertesacker, who will win his 100th cap for Germany.

“We know what we have to do and will go into the second game with all seriousness.”

Following Monday's 4-0 thumping of Cristiano Ronaldo's Portugal Germany know another victory would leave them on the verge of the last 16.

They will qualify for the knockout phase if they beat Ghana and then USA avoid defeat against Portugal on Sunday in Manaus.

Germany may be forced to reshuffle their back-four as Mats Hummels struggles to recover from a thigh injury.

The centre-back has been unable to train with the squad since he had to be helped off with deep bruising to his right thigh against Portugal.

Should the Borussia Dortmund star miss out, right-back Jerome Boateng will move across to partner Mertesacker in the centre.

Sampdoria's 22-year-old defender Shkodran Mustafi would then win his third cap at right-back, having come on for Hummels against Portugal.

After their 2-1 defeat to the USA in their group opener, Ghana need a win to keep their last 16 dreams alive.

Ghana's footballer of the year Kwadwo Asamoah has begged coach Kwesi Appiah to put him back in a more attacking role for the Fortaleza clash.

Asamoah was devastated by the Black Stars' US defeat and is eager to be given the chance to attack the Germans.

The 25-year-old was used as a left-sided defender in a loose 4-2-3-1 formation that failed to fire.

“I'm not a left back and I'm finding it difficult because I'd like to show what I'm capable of and show that I can do more,” the Juventus midfielder told AFP.

'Fight to the death'
Ghana's Berlin-born midfielder Kevin-Prince Boateng, who faces his half-brother Jerome in the German defence, has turned up the heat by describing the Fortaleza clash as a gladiatorial-style “fight to the death”.

A former German youth international, Kevin-Prince Boateng has made a habit of criticising Loew's side and his latest comments left the Germany camp cold.

“He's trying to get a reaction, but we're not tempted, we're staying calm.”

After the 1pm local time kick-off for the Portugal match, Germany can expect high humidity and temperatures over 30C on the north Brazilian coast.

But the later kick-off time of 4pm is an advantage, says Mertesacker.

“I have a better feeling about the 4pm kick-off time than the 1pm against Portugal,” said the Gunners star.

“In the afternoon, the sun doesn't shine directly on the pitch and we'll play more in the shadows, which is much more pleasant.

“As a north European, you feel a lot more sure of yourself in such conditions.”

It's a disgrace for NDC to celebrate 29 years of empty resul...
8 minutes ago