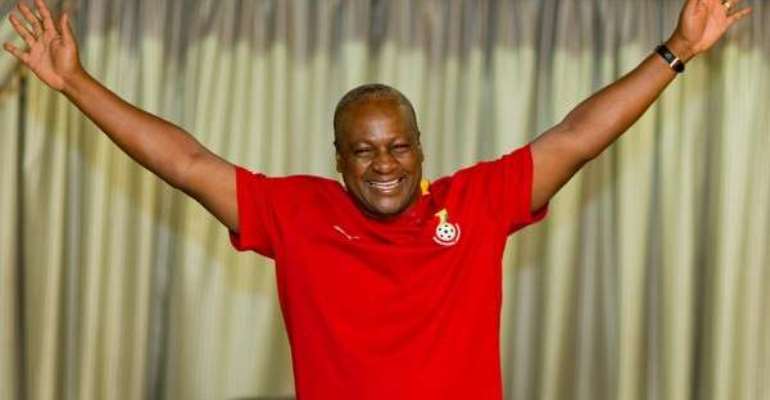 Today, the Black Stars will be playing against the United States of America (USA). It will be the third time that Ghana has met the US at the World Cup. In the two previous times we won.

I recall how, each time, the international media made it seem as though the victory came as a huge shock to the world.

In fact, references to Ghana's size kept coming up; we were labelled a 'tiny speck of a country'. We were compared to states, provinces, even islands, anything that illustrated our relative insignificance to a superpower like the USA.

Our victory over the US in 2010 gave us entry into the quarter-finals and made us the third African team ever to reach the final eight, with Cameroon being the first in 1990 and Senegal the second in 2002.

'Ghana's Black Stars have truly proved that they are, indeed, stars,' someone said after that match.

There was so much activity and commentary going on at that time and I can't remember now if it was an announcer, a reporter or a fan who had said that. What I do remember is that it struck me as being one of the truest things that have ever been said about our national team, the Black Stars.

Win or lose, they carry their name with truth and honour. They are the very embodiment of that lone Black Star at the centre of our national flag.

The Black Star in our flag is a lodestar, a star that is used to guide or steer the course of a vessel; someone or something that shines brightly enough to show others the way.

Our first President, Osagyefo Dr Kwame Nkrumah, wanted the black lodestar in our flag to pay homage to one of his mentors, Marcus Garvey, and his Black Star Line. In addition to encouraging trade between Africa and the US, the Black Star Line was tasked with being the lodestar for Black people in the Diaspora; it offered them a way back home to Africa.

Pan-Africanism was always the higher purpose and Dr Nkrumah hoped our own lodestar, the Black Star of our flag, would continue upholding that principle. That was why he proclaimed, on raising Ghana's flag at midnight on March 6, 1957: 'Our independence is meaningless unless it is linked up with the total liberation of the African continent.'

Throughout the course of history, the link between sports and politics has been proven time and time again. They can mirror and often even inform each other.

The Black Stars have always gone out into the world and carried the message of unity and African pride, but this was never more evident than at the last World Cup when they gracefully shouldered the hope of our entire continent.

I know that many were disappointed when the Black Stars were eliminated.

But that loss did not dim their light. If it had, we would not find ourselves here again at yet another World Cup and playing alongside teams that have proved themselves to be the best of the best.

What the Black Stars have taught us and continue to teach us as a nation is what truly makes a star shine; even in the midst of all the darkness that surrounds it, it still puts forth everything it has got to give.

Ghana, from the very moment of independence, has shone in this same way. Even now, with the difficulties that face us, we are putting forth everything we've got to give. We are always facing forward.

It is neither a victory nor a loss that defines us as a nation, nor as a football team. It is our perseverance, our ability to keep coming back, keep showing the world that no matter how small we are, no matter how down we may seem, we can never be counted out.

Ghana will always return, better, stronger and more determined to shine brighter than ever before.

May God bless our Black Stars.
May God continue to bless our homeland, Ghana.
By: John Dramani Mahama
President of the Republic of Ghana