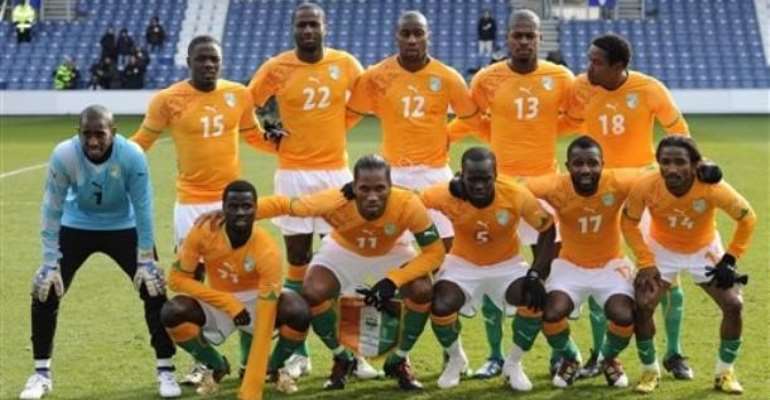 There is an upside to never having won a World Cup: Every tournament presents a fresh opportunity to try to make history.

For Africa as a whole, each edition provides five chances to get its hands on the main prize. Hope springs eternal and over the next month it rests with Nigeria, Ghana, Cameroon, Ivory Coast and Algeria.

Africa's big five are an impressive lineup which includes the continental champions, two former quarterfinalists, an outfit filled with legends and a representative from the region which in the early days of World Cup history was overflowing with promise and potential. There's talent and tenacity in their teams — but which of them can turn that into a trophy?

On current form and recent memory, Ghana's Black Stars would be expected to shine brightest from the continent. Their steady climb from a round of 16 finish in 2006 to the last eight in 2010 suggests that they are quick learners when it comes to competing on the international stage and have managed a continuity of success across two tournaments. They are also fresh off a 4-0 win over South Korea which will erase concerns after their defeats to Netherlands and Montenegro.

But they are also in a tough group, possibly the toughest of the tournament. Germany, Portugal and the United States are all big-name teams who carry big expectations. While Ghana are familiar with Germany and the U.S. — the former an opponent in 2010, and also bearing a family connection through the Boateng brothers; the latter a team eliminated by Ghana in the previous two World Cups — this pool will still demand the best of them and only then can they look to the knockouts.

That's why African hopes of advancement out of the first round may turn to Nigeria and Ivory Coast, who seem to have things slightly easier in the opening rounds. The Super Eagles will face Argentina, with whom they have a historical rivalry, Iran and World Cup debutants Bosnia-Herzegovina. Anything less than second place in the group will be considered unforgivable for the bullish Stephen Keshi and Nigerian fans.

Likewise, Ivory Coast, whose star-studded lineup includes Didier Drogba, Yaya Toure and Gervinho, will be expected to move beyond the first round. In Colombia, Greece and Japan, they have tricky opposition and their penchant for wearing the bridesmaid's clothes instead of the wedding gown could become an Achilles' heel. But if there were a tournament to change outfits, this is it.

Cameroon's history of infighting and political battles may see them written off in a group which includes the hosts, Croatia and Mexico, but it may provide the spark to spur them to surprise. If not that, then Samuel Eto'o's dreams of glory could be the switch. With a bit of belief, they could be Africa's flag-bearers again.

Not to be forgotten are Algeria, the only non-West African side at the World Cup. Their 2010 showing saw them into obscurity but they have been steadily building for bigger things. Under the radar is not always a bad way to go, especially as they find themselves in what could become thought of as the nondescript group with Belgium, Russia and South Korea. Unnoticed, perhaps Algeria could restore North African pride.

Africa's World Cup kicks off Friday, when Cameroon take on Mexico. It is a fixture that will bring back nostalgic memories of four years ago when South Africa opened the 2010 World Cup against the same opposition. Ivory Coast will be the next team in action Saturday against Japan. On Monday both Nigeria and Ghana open their accounts and by this time next week Algeria would have played their first match too.

A continent collectively waits. And hopes. And silently says to itself, “We hope one of you can bring it home this time.”