Back to business: Accam scores hours after Stars snub 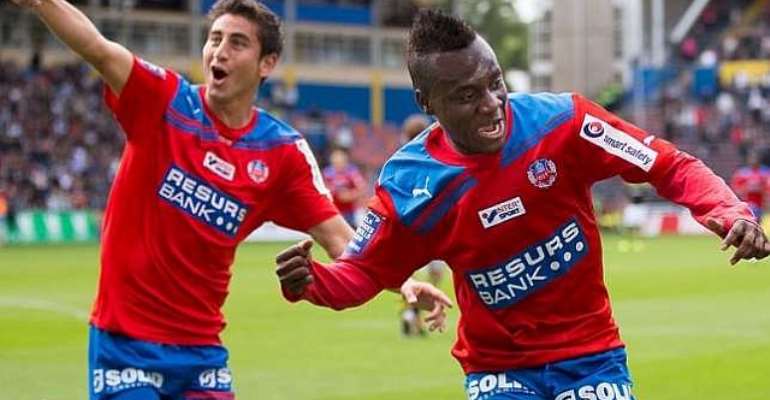 David Accam did not let the disappointment his dropping from Ghana's World Cup squad get to him.

A few hours after the news came through that he had failed to make the mark, the 23-year-old winger wrote on his facebook:

"I'm disappointed not to have been selected for the final squad, and not have the opportunity to prove myself against Holland. It is finished now."

He added: "When the squad was announced I took the first flight back to Sweden and my focus is now 100% on the Helsingborgs IF game against Falkenberg. God knows best!!!"

Just hours after that post, hours after he was considered not good enough for the World Cup, he recovered from the set-back and bounced back in style.

He emerged the saviour for his club, scoring the game's only goal as they beat Falkenberg 1-0 at home in the Swedish Allsvenskan (league).

It was his 6th goal in nine matches (7th in 10, if the first game of the season against Djurgaden that was called off half way through is considered).

This also brought his overall tally to 12 goals in 15 games across all competitions -  all from the wings -  as he continues to steal the headlines in Sweden, taking over from his friend and compatriot Majeed Waris.

Accam, who is now Ghana's highest scoring foreign-based player after Asamoah Gyan, will hope to add to this tally when his side - now ninth on the league log - travel to play IFK Goteborg on Friday.