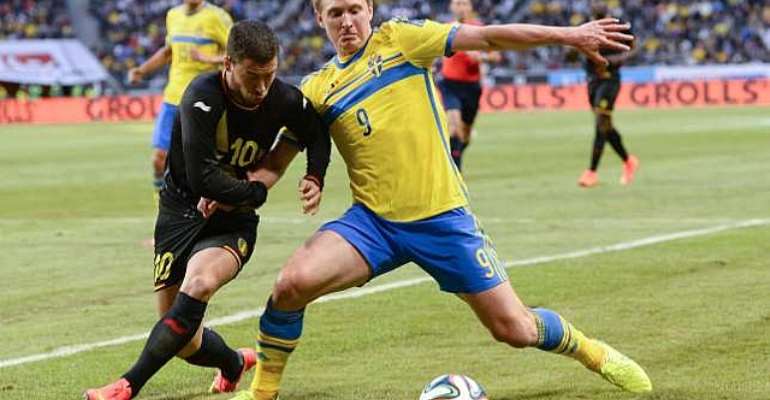 A knee injury had meant Hazard was doubtful for the contest at Solna's Friends Arena, creating concern for Belgium supporters with their FIFA World Cup opener versus Algeria just over two weeks away.

But the Chelsea winger put those worries aside, his 79th-minute strike adding to Romelu Lukaku's effort as Marc Wilmots' claimed a solid victory.

Hazard was withdrawn immediately after, with Wilmots no doubt relieved to see his star man come through unscathed.

The head coach would also have taken great heart from Lukaku's goal, as he found the net with a stunning controlled finish from range to follow up a hat-trick against Luxembourg earlier this week.

A complete performance against a worthy Sweden side - albeit one without star man Zlatan Ibrahimovic, who was on the bench - was capped by a clean sheet, with skipper Vincent Kompany immense throughout.

The hosts - who failed in their efforts to qualify for the World Cup - initially enjoyed the upper hand, almost taking the lead when Erkan Zengin side-footed just over the crossbar.

It was all one-way traffic thereafter, with Kompany narrowly volleying over after meeting Dries Mertens' corner.

Belgium did not have to wait much longer for an opener, however, as Lukaku picked up the ball 25 yards from goal and curled powerfully beyond Andreas Isaksson.

It was only thanks to a superb stop from the goalkeeper that Sweden did not find themselves 2-0 down, Isaksson getting down low to keep out Daniel Van Buyten's point-blank header from Mertens' deep cross.

Any favour Mertens had gained with Wilmots from that delivery was almost extinguished moments later, the winger fortunate to stay on the pitch following a rash two-footed lunge.

Perhaps spurred on by a sense of injustice, Sweden pressed forward at the end of the half - only for their final ball to be found wanting as Belgium defended resolutely.

Sweden were unable to carry that momentum into the start of the second period as Kompany again just missed the target from a Mertens set-piece.

Unwilling to give up, Erik Hamren's side saw off the danger before showing some attacking intent of their own.

Indeed, Thibaut Courtois' goal was under siege for long periods towards the end, Jimmy Durmaz hitting the woodwork with a vicious strike.

But any hopes Sweden had of getting something from the game were extinguished when Hazard slid beyond Isaksson late on.