End of the road: Jerry Akaminko ruled out of World Cup 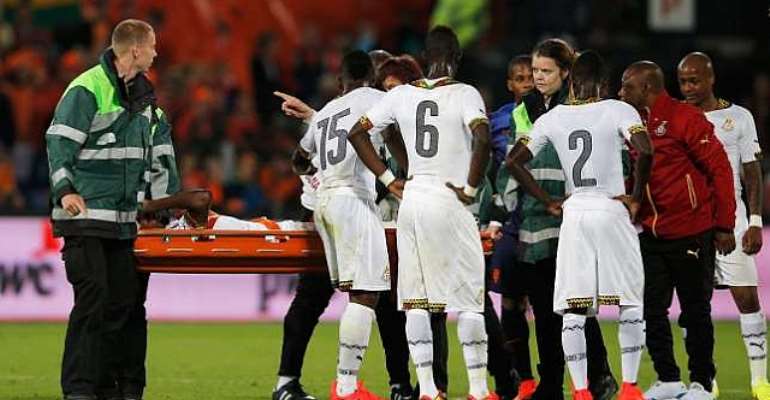 Akaminko fell awkwardly in the final minute of Ghana's pre-World Cup friendly against the Dutch in Rotterdam, fracturing his ankle, which will keep him on the sidelines for three months.

"X-rays have revealed that there is a fracture to the left ankle joint, that is the fracture of the fibula bone. What will have to be done is surgery," Dr Baba told Ghanafa.org .

"If surgery is done depending on his rehabilitation we will give him at least three months to be able to fully recuperate from the injury and start playing."

Akaminko left Ghana's penultimate friendly before Brazil 2014 on a stretcher, with the Eskisehirspor defender making his seventh appearance for his national team.

Ghana coach Kwesi Appiah was left downcast following the news Akaminko would be unable to compete at the World Cup, revealing he had big plans for the central defender, who had started his country's past two matches

"It is unfortunate that Jerry has got to face this," Appiah said.

"Looking at the training he has done with the team we had lots of hope for the World Cup.

"All we have to do, apart from the support we will offer him is to pray for him to come back stronger."

The Ghana FA confirmed Akaminko will travel with Appiah's side to their pre-tournament training camp in the United States, where he will have surgery.

Ghana have been pooled with Germany, USA and Portugal in Group G

'Give peace a chance', ICoast ex-president tells police
32 minutes ago