There will be no complacency on Sunday - Coach Addo 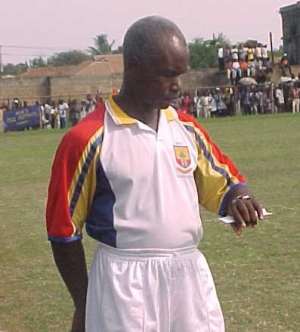 Accra, April 20, GNA - Coach Herbert Addo, the acting stand-in coach of Kumasi based King Faisal Football Club has noted that the team is not going to allow complacency to eat into their head in their clash against Power Dynamos of Zimbabwe in the CAF Cup Competition at the Kumasi Sports Stadium on Sunday. "We consider Sundays' game as starting on a scoreless sheet, because we want to go all out to advance to the next stage of the competition." Coach Addo stated. Speaking to the GNA Sports in an interview, coach Addo said they have put the one nil victory against their opponents at their own backyard aside, and are determined to approach the second leg match with a high sense of motivation and dedication to carry the day. He said his boys have been training seriously for the match since the Zimbabweans are also a good side and are capable of pulling a surprise hence they are leaving no stone unturned in their approach to the game. Coach Addo said all his players are in good shape for the match, adding that those who sustained various degrees of injuries in the match against Hearts last Sunday are recovering gradually. The coach expressed the hope that the players would be fully fit for the Second leg match on Sunday. Commenting on the loss against Hearts of Oak last Sunday, coach Addo said it was a good exercise for them because it has enabled the team to identify its weaknesses and the technical team is earnestly working on them. He added that Hearts came into the game with so much determination to win at all cost even though it was a friendly match, whilst the Faisal team was more relaxed hence the defeat suffered at the hands of the Phobians. Coach Addo joined Faisal two weeks ago just before they began their maiden campaign in the CAF Cup in the first leg match against Dynamos in Zimbabwe, which they won by a lone goal.
The coach whose experience on the continental level dates back to the days of the exploits of Sekondi Hasaacas in the WAFU competition and with Obuasi Goldfields when he led them to the finals of the maiden edition of the CAF Champions league and later with Accra Hearts of Oak would be taking a shot at the continent again as he leads his new side in the competition.