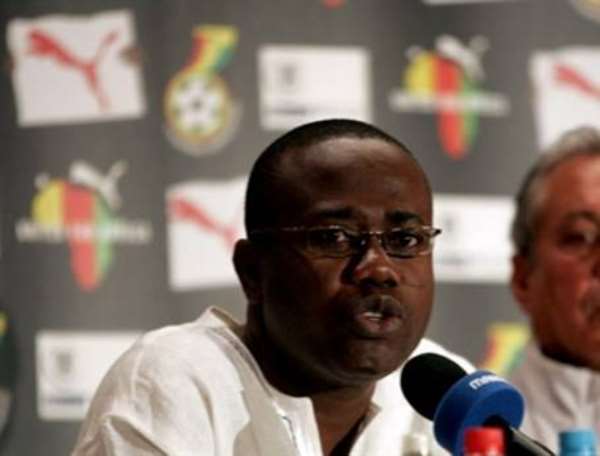 Dear Mr. President, you don't know me but you know the topic upon which I write you this letter.

Since my childhood, I have enjoyed watching Ghanaian players dazzle on the big stages of the game.

The happiness I get when our gallant Blackstars are playing is great. Players like Odartey Lamtey, C. K. Akonor, the maestro Abedi Ayew Pele and his brother Kwame Ayew made me fall inlove with the game.

Though Ghana has not won the AFCON in my life time I'm always a proud Ghanaian as far as football is concerned.

Our performances in the world cups make me want to dream and think that we can win it someday soon. If we really have ambitions of winning the World Cup, I think Ghana should be good in all aspect of the game. This brings me to why I'm writing.

I have watched the Ghana national team go through a whole lot of metamorphosis to get to where we are now, a regular participant of the World Cup and a force to reckon with. But through these changes one thing still remains the same, our inability to have a successful penalty kick.

During the 2012 AFCON quarter final game between Ghana Blackstars and the Chipolopolo of Zambia, we had a penalty that was saved by the scary Zambian goalkeeper, Kediaba.

Though at that time, I associated the win of the Zambians to involvement of the ghost of their former players who died in a plane accident. It still leaves us with a lot of “WHAT IFS”. What if we scored that penalty?

Also, in the 2013 AFCON quarter final game against Burkina Faso, the Blackstars were playing very well, even though they were being hacked down at every corner of the pitch, the players held their own. And then the 120 minutes were done with the game still tie, I could hear the whole country sigh the biggest I have ever heard, “HMM”.

The most painful one was in the 2010 world cup, when Luis Suarez caught the ball, I could taste the semi final game against the Netherlands.

Asamoah Gyan was the right man to take that penalty, having scored a couple in the previous games, I always told myself had he concentrated on the penalty instead of the monko dance which was only possible if he had scored the penalty kick, we would have reached the final.

This is because we had played the Netherlands in a friendly match prior to the world cup finals; they won by four goals to one and with that they would have underrated us.

We would have gone right through them and they would not know what hit them. We would be in the final and could probably win it because, I was sure that players like Dede Ayew, Agyeman Badu, Samuel Inkoom and others knew how to grind out a win in the final, even with ten men (with reference to the 2009 U20 world cup, in Egypt ).

The funny part was how fast I did the above permutations and combinations, this I did in between when Suarez caught the ball and Asamoah missing the spot kick.

After the penalty miss, we had to go to the spot kick again to decide who goes to the semis, and then I heard the SIGH again, HMM! Ghanaians all over the world were hoping that we would go through but deep inside we knew the outcome. Why should it be so? When Asamoah scored our first, I thought to myself, we could go through, and then John Mensah happened.

Mr. President, the World cup is here again and as expected, we will be there, are you going to let a penalty kick break our hearts again? Is there nothing you can do to at least improve on our penalty kicking skills? Penalty kick is the surest way of scoring a goal but to the Ghanaian fans it's not.

I have a suggestion, why don't you and your office organize some kind of A PENALTY KICK TOURNAMENT or LEAGUE. With this teams in the country could participate and by so doing players can improve on their penalty taking skills.

This solution is mainly for up and coming future national team players but for the mean time players should be made to practice penalty taking for at least 10 minutes of every training sessions.

It would be nice to feel confident and a little less stressed when a game ends in a penalty shootout.