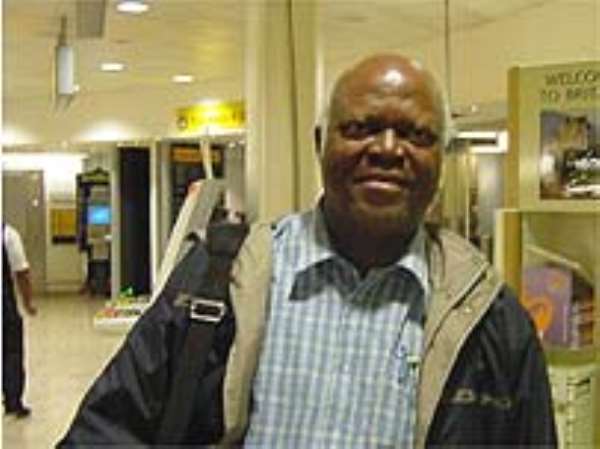 Outgoing Ghana Football Association Chairman, Ben Koufie yesterday honoured his pledge to defend himself before the Executive Council of the Ghana Football Association when he appeared before a meeting of the Council and steered carefully off trouble with a terse denial of published comments attributed to him and thought to be disparaging of the Executive Council.

Mr. Ben Koufie blamed the Graphic Sports newspaper for 'misrepresenting' statements he gave in an interview and told the well-attended Council meeting that he regrets granting the interview to the national newspaper for it to be turned upside down particularly at the twilight of his reign in office as Chairman of the Ghana Football Association, and added that a kicker to the headline of the said publication alleging that the Executive Council is the mother of all frustrations in Ghana Football is a creation of the newspaper.

"I did not say that it was the mother of all frustrations. Graphic Sports can explain why they did that. The heading was given by Graphic or somebody there and it differs from the interview,"' the chairman was quoted as telling the meeting.

The Council members agreed that the comments in the publication complained of were in bad taste but the meeting had no choice than to accept Mr. Koufie's explanations and show of remorse and consequently asked him to purge himself of them by writing a rejoinder to the newspaper to retract the statements.

Mr. Koufie said that never in his almost three years working relationship with the Executive Council has he had any problems with it and he personally felt bad on seeing the publication because of the cordial relationship he has with the Chairman of the Council, Alhaji Y.A. Ibrahim.

According to FA General Secretary Kofi Nsiah who spoke to the Soccer Express, the meeting also pointed out to Mr. Koufie that his assertion in the same publication that the Executive Council system does not exist in the structure of any football association anywhere in the world cannot be correct as it is the same structure that governs FIFA, CAF and most football associations throughout the world.

and internationally because the publication was carried over the internet, contending that the maligned Executive Council had gone to the aid of the Management Board in several turbulent times but would not use the occasion to sing its own praises because it would not pay for Mr. Koufie to leave office with a feel of bitterness and acrimony.

explain himself, Mr. Koufie said "I hasten to inform the Executive Council, that it was never my intention to bring the Council into disrepute in anyway as the Graphic Sports portrayed" and pleaded that he would answer and explain all issues which see to distort the cordial relationship that has existed between him and the Council.

He leaves office after the FA's Congress on April 15 and 16 and is to be replaced by either Dr. Nyaho Tamakloe or Dr. Kofi Amoah, both government nominees for the post.

Police place GHS20,000 bounty on killers of policeman in Jam...
4 minutes ago