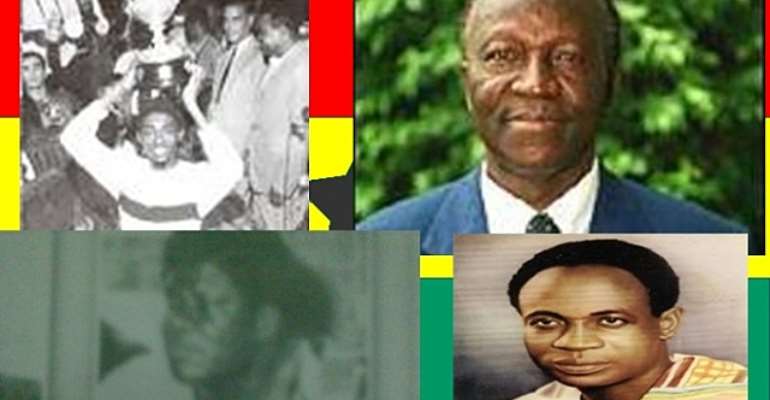 Preparation
The role of Dr. Kwame Nkrumah
Dr. Kwame Nkrumah with his ambition to ensure Africa Unity believed that football could be used as a tool to ensure that. As a result he appointed Ohene Djan the then Chairman of the  Ghana Amateur Football Association (GAFA) as the Director of Sports, a new Ministerial Portfolio  on 1st July, 1960. Due to his love for football he enabled Ohene Djan to form Real Republicans, also known as Osagyefo's Own Club in the early 1960's. As a model club two players were selected from each team and this enabled them to be an instant hit in Ghana football, hence won one league title and four 4 consecutive FA Cups, which is still a Ghanaian club record in the FA Cup. This team formed a core of the Black Stars team that won the nations Cup in 1963.

Camping and other preparatory tournaments
The Black Stars group at the time was fully a local based team, so there was a long period of camping to prepare them for the tournament and this ensured team work and stability.

The Stars prior to this tournament were champions in their own right, winning three West African Championships.

In 1962 the Stars played against Real Madrid, who had won the Champions league for 5 times, with the likes of Puskas, Alfredo Di Stefano at the Accra Sports Stadium and the game ended 3-3. This boosted their confidence.

The road to the final
The competitions started on Saturday 24th November and ended on Sunday 1st December.

The nation's cup was strengthened in 1963 with the joining of new independent African countries; politics was high in the global agenda and with the formation of OAU in 1963, putting the pan African sentiments of leaders such as Nkrumah centre stage. Ghana for the very first time participated in the nation's cup and at the same time hosted the tournament.

Ghana was in Group A, against the likes of the defending champions Ethiopia and Tunisia. Ghana drew the opening game against Tunisia and Welberforce Kwadwo Mfum in the 9th minute became the first Ghanaian player to score a goal in the nations Cup, before Djedidi equalized for Tunisia.

Ghana beat the defending champions Ethiopia by 2-0 and the two goal hero was Edward Acquah to top the group.

Ghana booked a date with Sudan in the final. Sudan topped a group made up of Egypt and Nigeria.

Three times champions of West Africa, Ghana ascended the continental throne, after beating Sudan 3-0 in the finals of the African Cup of Nations. There was much combination among the soccer Trojans- Edward Acquah, Leonard Acquah and Mfum at the early stages of the 1st half. Ofei Dodoo replaced Leonard Acquah and he brought some life into the game in the 2nd half. Mfum and Acquah pressured so in a desperate attempt to clear the ball, a defence player of Sudan handled the ball. Skipper Aggrey Fyn beat goalkeeper Sabit Dodoo from the spot in the 62nd min. There was some sense of humour on who was to take the penalty. When Aggrey Fyn, picked the ball, Edward Acquah, told him, Nanabenyin, as he was affectionately called, “Aren't you afraid of taking Ghana's penalty? for me I'm gone”. He said it in Fante and this shows the fear of Ghanaians taking penalty since the early stages of Ghana football. This second half goal opened the door for Mfum to bang in two goals to complete the wallop.

Celebration after the victory over Sudan
The celebration was a never to be forgotten one according to eyewitnesses and participants like Osei Kofi, Kofi Pare, Leonard Acquah and  Ben Acheampong.  “The people of Ghana celebrated as if Ghana had attained independence”, Osei Kofi recalled. Another eyewitness said people took to the drinking spot and started drinking to mark the victory. Others poured on the streets to celebrate the feat.

The significance of the victory to Dr. Kwame Nkrumah

It was a triumph for both the team and their leader Nkrumah. Football, he believed, could be a model for African pride and unity and with a successful Black Stars team he had a supreme vehicle.

Clubs contribution to the 1963 team
Real Republicans: 9
Kotoko: 4
Corners: 2
Hearts of Oak, Defence Stars, B.A United: 1
Head Coach: C.K Gyamfi
Assistant coach: Ben Kouffie
Team Manager: Kwabena Haggan (Late)
Director of Sports: Ohene Djan
APPRECIATION
FINANCIAL
Ghana as a nation, through the Ministry of Youth and Sports, needs to recognize these heroes by establishing a pension scheme for them, because playing for the nation in those days was just a pride and not for any other commercial gains like in recent times. Some of the old players are now living in abject poverty and they are bitter. Promises made to most of these heroes were not implemented due to some reasons including coup d'état. For instance, the 1965 AFCON winning team according people like Osei Kofi, who was part of the team, were promised an estate house, but never happened because Dr. Nkrumah was overthrown in February, 1966 and also from news report, I.K Acheampong promised the 1978 triumphant winning team an estate house each and once again due to coup d'état it never came to pass. Most of the heroes of the African Cup of Nations success of Ghana believe that until the nation fulfills promises made to them, Ghana will never win a nations Cup trophy again. As a nation we need to pay particular attention to this because a nation which doesn't honour its heroes is not worth dying for.

MONUMENTAL RECOGNITION
Ghana as a nation needs to name most of our sports facilities after some of these heroes. In this direction, the Ministry of Youth and Sports has really done well, since the era of the Kufuor-led government to the present John Mahama-led government, and this should be sustained. The Accra Sports Stadium named after Ohene Djan, the first Director of Sports who led Ghana to two nations Cup triumphs and the Kumasi Sports Stadium named after Baba Yara, who got paralyzed in an accident with the Real Republicans team in 1963, hence denying him the chance to feature for Ghana in the 1963 nations Cup is a laudable idea. The Cape Coast Stadium, is also named after Robert Mensah, the goalkeeper of the Black Stars in the 1968 and 1970 African Cup of Nations, losing finalist. It is my wish that one of the stadia is named after, Charles Kumi Gyamfi, the coach of the 1963 Nations Cup winning team. He is one of the most successful coaches in the nations Cup history:  he won the nations Cup in 1963, 1965 and 1982, before returning to Ghana as the technical director during the 1992 nations Cup. C.K Gyamfi who once captained the Stars, per his achievement, he is arguably the greatest sports hero in Ghana.