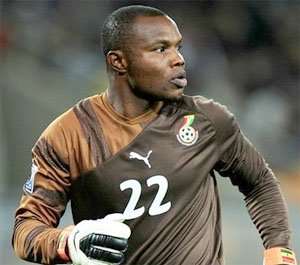 Ghana coach Kwesi Appiah has axed goalkeeper Richard Kingson from his squad to face Egypt this month, but has kept faith with Kevin-Prince Boateng despite doubts over the Germany-born midfielder's loyalty to the Black Stars.

Coach Appiah recalled the trio of Harrison Afful, Dominic Adiyiah and goalkeeper Daniel Agyei in the 24-man squad for the second-leg of the 2014 World Cup playoff clash scheduled for Cairo.

But the squad is dominated by the key players who were instrumental in the 6-1 first-leg thrashing of the Pharaohs with captain Asamoah Gyan, Michael Essien, Sulley Muntari and Kwadwo Asamoah all in the team.

Coach Kwesi Appiah has opted for experience as he aims to make the most of his first leg advantage with other key players like Andre Ayew, Abdul Majeed Waris and Mubarak Wakaso also in the team to face Egypt.

The major exclusion from the squad is Kingson who was recalled to the fold last month after a two-year absence but coach Appiah has decided to replace him with South Africa-based Agyei who has been impressive for Free State Stars.

Kevin-Prince Boateng has been named in the squad even though some have questioned his commitment to the Ghana cause after missing the previous game against Egypt but surfaced days later to play in a match for his club Schalke.

Harrison Afful returns to the Black Stars after missing the first-leg because of suspension to provide competition for Samuel Inkoom at the right-back position.

Dominic Adiyiah takes the place of Mahatma Otoo as coach Appiah tweaks his squad for the match in Cairo.

The second leg of the tie will be played on 19 November in Cairo.

The tie had been billed as the tightest of the five African play-off ties that will decide who will make it to next year's tournament in Brazil.

But it is now almost guaranteed that the Black Stars will be on the plane to South America after the huge 6-1 win in Kumasi.