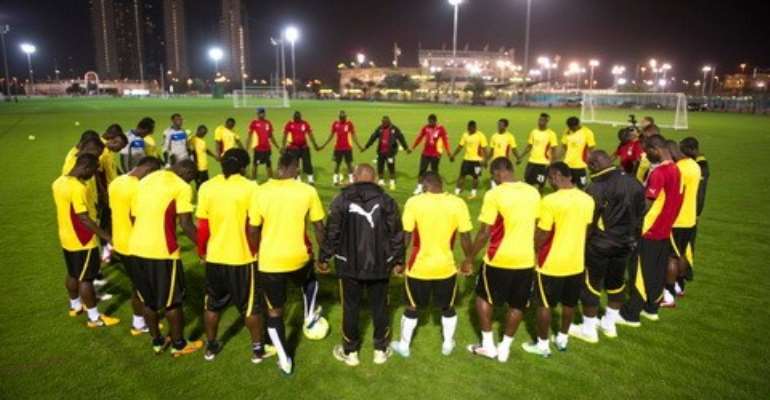 Ahead of their crunch double header against Egypt in the Brazil 2014 qualifying play-offs, 'Ghana' sends a word of caution to the Pharaohs

Dear brother Egypt,
I write you this letter with mixed feelings and I believe you are quite conscious of what has prompted it.

You do know how much I loathe to have to contest anything with you due to the mutual affection and respect we share, but it seems on this rare occasion we have been forced into each other's path to Brazil 2014. We have always been intimate, of course, ever since the day my founding father Kwame Nkrumah married the beautiful Fathia on the recommendation of then Egyptian leader Gamal Abdel Nasser and begot three beautiful offspring, two of whom are active players in modern-day Ghanaian politics.

That said, we have had our occasional grudges in the past. You rubbished the 'host and win' mantra I adopted during CAN 2008 by winning the title on my territory, only for me to exact cold revenge the very next year at the Fifa Under-20 World Cup you hosted, by becoming the first African side to claim the ultimate prize at that level. Your own team didn't reach too far on that occasion as I rightly recall.

Level peggings, then, eh?
Well, not exactly.
The fact that you beat me in the 2010 Africa Cup of Nations finale to secure your seventh and most recent continental title means we still have one more score to settle, and that I intend to do in some style on October 13 and on the weekend of November 15-19. Forget the 3-0 thumping I dished out to you last January ahead of the 2013 Afcon; that was just a warning of what I am capable of.

Besides, let's face it: you currently aren't the force you have always been, having missed successive Afcons. What you once were, I now am, and I'd prove that when we meet. Don't think I would be intimidated by whatever atmosphere you'd have to offer when I visit, for my own Baba Yara Stadium itself is a veritable fortress.

And, to think of it...
You taught my people the worth of having a local coach on the evidence of what magic Hassan Shehata worked while in charge of your national side and, just when we took a leaf from your workbook by appointing locale Kwasi Appiah as coach, you switched to our old ways by hiring an expatriate, American Bob Bradley - the very man whose USA team fell flat before our Black Stars at the last World Cup - and so maybe you could take some tutoring from us in that regard as we prepare to show you just how much we've learnt.

There isn't much else I can say for now. I would do the remainder of the talking on the pitch when the fixtures are due. All that remains is to count the days left till the first leg, and then the contents of this letter would seem ever so real to you.

Until then, read this thrice a day, pray your hearts out, and ponder on the words of Exodus 14:13.