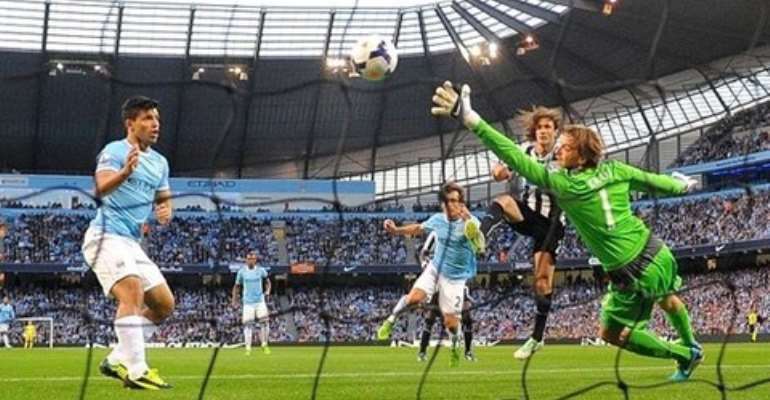 New Manchester City manager Manuel Pellegrini enjoyed a dream Premier League start as his side swept past 10-man Newcastle with a superb display.

Sergio Aguero steered a shot past Tim Krul for City's second before Steven Taylor saw red for a swipe at Aguero.

Yaya Toure curled in a free-kick after the break before Samir Nasri scored late on as City cruised to victory.

It was a resounding performance by an irrepressible-looking City, with summer signings Fernandinho and Jesus Navas handed starts and appearing accomplished throughout. Fellow debutant Alvaro Negredo also came on in the second half and was denied a goal after being ruled marginally offside.

Indeed, had Krul not been in inspired form, the margin of victory could have been even greater for Pellegrini's side, who have won their last eight games against the Magpies.

Although the new additions adjusted well, it was Dzeko who was City's outstanding performer as he created two goals and peppered the Newcastle goal with several efforts.

City have been the biggest spenders in the close season, investing nearly £87m on four new players, and their performance at a buoyant Etihad Stadium will give their Premier League title rivals plenty to consider with the transfer window shutting on 2 September.

In contrast, Newcastle suffered a nightmare start to their campaign, and the mood of Newcastle manager Alan Pardew will hardly have improved after Arsenal made a £10m bid for midfielder Yohan Cabaye in the build-up to the game, with the Frenchman being left out of the squad.

The hosts, whose only sour note was losing captain Vincent Kompany with what looked like a groin injury, could easily have been two goals to the good before they went ahead. First, Aguero, and then Dzeko, drew fine saves from Krul after penetrating runs down the right by Pablo Zabaleta, who signed a new four-year contract before the game.

Pellegrini only had to wait until the sixth minute of his Premier League bow to see his team take the lead, though. Dzeko was involved again as he collected Silva's through ball down the left side of the penalty area and crossed for the Spaniard to head home after the ball took a deflection off Taylor's shoulder.

Newcastle, who only secured their Premier League status in their penultimate game of last season, could not cope with City as the hosts poured forward with pace and width.

The combination of Moussa Sissoko and Cheick Tiote in centre midfield gave the Magpies back four little protection and Dzeko dragged another chance wide before he cleverly set up City's second goal after 22 minutes.

The visitors were actually on the attack but Kompany dispossessed Yoan Gouffran, before surging to the other end of the pitch. The Belgian's driven pass was then flicked on by Dzeko and Aguero took it in his stride before outpacing Taylor and finding the bottom corner beautifully.

Pellegrini pumped his fists in celebration to an enlightening start to his City career.

Hatem Ben Arfa was an isolated threat for Newcastle, who were limited to Gouffran's effort being ruled out for offside and Tiote's long-range shot being comfortably saved by Joe Hart.

And if the gulf between the two sides was not enough during the first half, it got worse for Pardew's side just before the break. Jonas Gutierrez went off injured and then Taylor received his marching orders for swinging at Aguero as the pair challenged for a high ball.

Krul, who had an outstanding evening, denied Dzeko twice in the second half, saving a point-blank header and then a 25-yard shot.

But he could do little to stop Toure's free-kick as the Ivorian curled it into the top corner five minutes after the restart following a trip on Aguero.

Newcastle's misery was complete when Zabaleta's pass made its way through to substitute Nasri, who fired past a helpless Krul.

Newcastle boss Alan Pardew: "The performance up until the sending off was pretty sound. The two goals City scored, they have a lot of talent, but we threatened their goal and we looked like we could get something.

"But it was a silly act from Steven Taylor and he has apologised to the lads.

"Goalkeeper Tim Krul was fantastic and needed to be because Manchester City will not lose many games this season. At the end of the day we have just lost a game, nothing else, and have two home games coming up now."