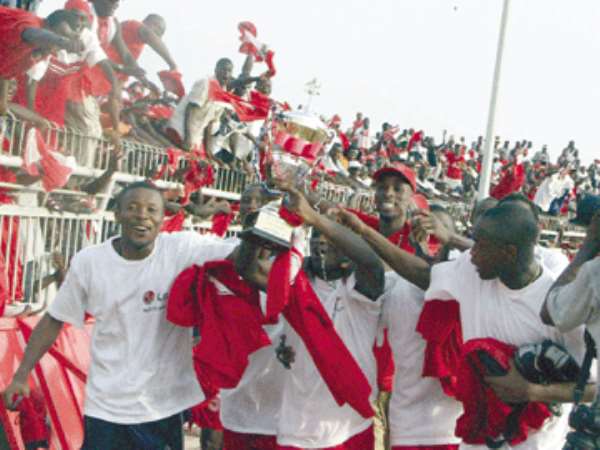 Kumasi Asante Kotoko gained a 1-0 win over Liberty Professionals in the opening match of the Coca-Cola sponsored Ghalca Top Four Tournament in Kumasi on Wednesday to serve notice of their intention to defend the trophy they won last year. Edward Owusu Ansah's goal on the stroke of half time did the damage to Liberty Professionals. But in losing the match, Liberty Professionals proved that they were still a force to reckon with despite losing a number of their seasoned players including William Tiero who played for Kotoko. Parading a youthful side which combined skill with speed, particularly in the first half, Liberty Professionals exposed the deficiencies in the Kotoko team, especially in defence, which they most of the time tore into shreds but inexperience robbed them of scoring. For instance in the 19th, 30th and 36th minutes, George Appiah, Obeng Darko and Tuaha Khamix either shot feebly into the hands of goalkeeper Alhassan Mohammed or shot erratically. In spite of a slight rainfall in the afternoon which left an over cast cloud and made the field slippery, Liberty moved into attack and earned a corner kick in the seventh minute but wasted it.
Kotoko counter attacked and had a good chance to take the lead in the 10th minute but goalkeeper Patrick Antwi of Liberty blocked Nana Arhin Duah's chip with his body.
A minute later, Charles Taylor fired a fierce free kick, which was tipped over the bar.
Liberty then switched into gear again and a swift defense splitting move in the 19th minute found Obeng Darko who easily outpaced the sluggish Kotoko defence but he shot feebly into the waiting hands of goalkeeper Alhassan.
Kotoko found the going very tough as their midfield broke down and coupled with uncoordinated and faulty passes, the "Ghanaian Reds" found the going very tough, while Liberty on the other hand moved faster and had better control of the ball.
Liberty came close to scoring again in the 30th minute but Felix Baffoe's tricky shot was tipped over the bar.
They were relentless in their attack and in the 36th minute they again wasted another opportunity when Obeng Darko pushed the ball feebly into the hands of goalkeeper Alhassan.
Let off the hook, Kotoko counter attacked and just on the stroke of half time, Edward Owusu Ansah sent the stadium roaring with the opener, which turned out to be the only goal of the day. Kwadwo Poku raced with the ball to the left flank and sent a neat pass to Owusu Ansah who blasted home.
The resumption saw Kotoko totally transformed and had three corner kicks within two minutes but could not utilize them. Liberty then took over again and George Appiah sent Tuaha Khamix on with a beautiful pass in the 56th minute but he wasted it.
It became obvious that Kotoko's central defender, Joe Hendricks, last year's star of the competition could not cope with the speed of the young Liberty lads and was pulled out for Dan Acquah while William Tiero also took over from Kwami Adjagba in the 54th and 55th minutes respectively.
Liberty also sent in Jonathan Quartey for Michael Helegbe and Osei Acheampong for George Appiah in the 71st and 83rd minutes respectively. At the end of the game, Yusif Chibas won the best player award and received some Coca-Cola products and two mobile phones. Summary Results of the opening match of this year's Coca-Cola Top 4 championship played at the Kumasi Sports Stadium on Wednesday, January 21, 2004. Kotoko ........ One (1) Liberty .........Nil (0) Scorer: Edmund Owusu Ansah (45th min) Standings of the on going Coca Cola Top Four Tourney after the opening match between Kumasi Asante Kotoko and Liberty Professionals played at the Kumasi Sports Stadium on Wednesday. TEAM HOME AWAY --- P W L D F A ... P W L D F A GD..PTS Kotoko 1 1 0 0 1 0 - - - - - - 1 3 Liberty - - - - - - 1 0 1 0 0 1 -1 0 Hearts - - - - - - - - - - - - - - Faisal - - - - - - - - - - - - - -
Note: Accra Hearts of Oak and Kumasi King Faisal are scheduled to play at the Accra Sports Stadium on Thursday, Jan 22, to complete the opening matches of the tournament.