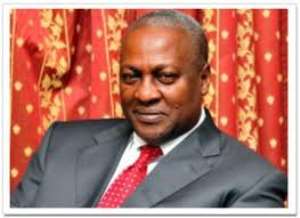 Winneba (C/R), March 3, GNA -The Kasena-Nankana Students Union (KANASU) of the University of Education, Winneba (UEW) has congratulated His Excellency John Dramani Mahama on his elevation to the highest office of the land.

he Union also thanked the President for appointing the Member of Parliament (MP) for Navrongo Central, Mr Mark Woyongo as Minister of Defence.

In a statement signed by Namoo Peworo Kojo, President of the Union and copied to the Ghana News Agency in Winneba at the weekeend, the students congratulated Mr Woyongo on his new appointment, saying they had no doubt he would live up to expaectation.

The statement said Mr Woyongo when he was Regional Minister for the Upper East, 'demonstrated a high level of responsibility and fatherliness by ensuring that each district in the region received its fair share of the Regional cake."

It stated, 'We are therefore highly convinced that you would bring the experience you gathered to bear on your new office'.