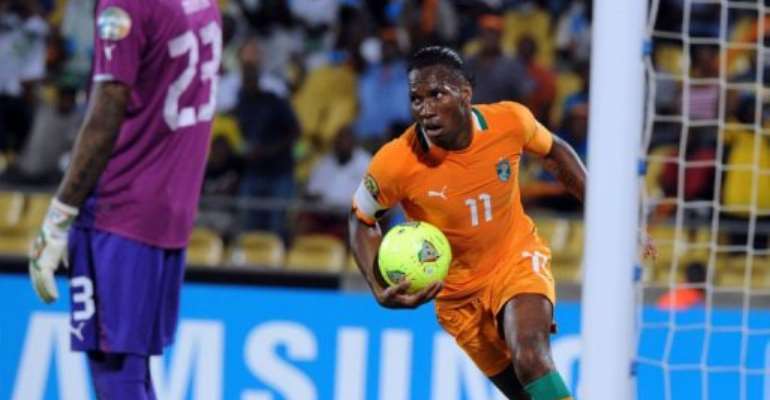 RUSTENBURG, South Africa (AFP) - A virtual second-string Ivory Coast side scored twice inside four minutes to snatch a 2-2 draw with Algeria on Wednesday at the Africa Cup of Nations.

Didier Drogba and Wilfried Bony struck for the title favourites after Sofiane Feghouli and Hilal Soudani had put the Desert Foxes two goals ahead with 20 minutes remaining.

When the draw was made last October, this fixture stood out as a highlight of the 24 first-round fixtures, but when the teams walked on to the Royal Bafokeng Sports Palace pitch only pride was at stake.

Victories over Togo and Tunisia had clinched top spot for Ivory Coast with a game to spare while losses to the same countries had eliminated Algeria, who are ranked second in Africa behind the west Africans.

Algeria coach Vahid Halilhodzic resisted wholesale changes despite losses to Tunisia and Togo eliminating his team. He called up Khaled Lemmouchia and Ryad Boudebouz in place of Foued Kadir and Sofiane Feghouli.

Boudebouz had the best chance to break the deadlock in a boring, goalless opening half, but struck a seventh-minute penalty against the right post and it rebounded to safety.

It was a dubious spot kick on two counts, with Soudani going down far too easily after the slightest of touches from Ismael Traore, and the foul appeared to have been committed ouside the box.

Kalou had a chance when a long ball fell into his path off the back of Drogba, but he blazed the ball over, and Drogba was guilty of equally poor finishing near half-time with a left-foot shot.

The second half was no better than the first with little to excite the crowd until Algeria were awarded a second penalty when Arthur Boka handled and substitute Feghouli made no mistake from the spot on 64 minutes.

Algeria doubled their lead six minutes later with a classic goal as Feghouli crossed from the right and Soudani climbed to nod the ball powerfully past slow-reacting goalkeeper Daniel Yeboah.

Ivory Coast finally awoke from their slumber to score twice within four minutes through Drogba and Wilfried Bony and bring the teams level 10 minutes from time.

A glancing header from soaring Drogba flew past Rais Mbolhi and a shot from Bony took a wicked deflection off Djamel Mesbah to give the Algerian goalkeeper no chance.