Another failed attempt by Ghana at the 2012 Paralympics 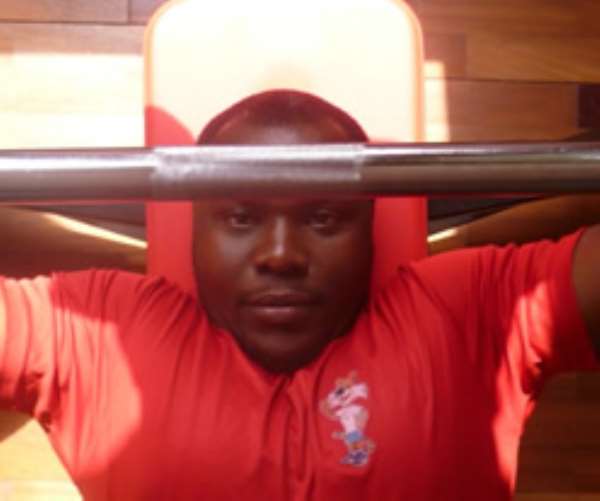 London, Sept. 2, GNA - Ghana's Charles Teye Narh could only manage an eighth place in the 10-man keenly contested Powerlifting event in the 14th Paralympic Games in Excel, London, on Sunday.

Teye Narh becomes the second Ghanaian from the 4-member contingent that failed in their bid to make an impact in the Games.

The Ghanaian could only managed a succesful lift of 140 kg in his first attempt and had his 142kg lifts in the second and third attempts ruled "bad lift" by the judges in front of close to 6,000 spectators at the South Arena 3 Hall, in Excel, London.

Though Teye Narh's 140kg single successful lift, earned him a third place in Group B, it was not enough to keep him in the medal zone after results of Group A, was added to his group pushing him down to the eighth position.

He has thus ended his campaign in the competition and joins Raphael Botsyo Nkegbe, who also failed in his attempt to pick a place in the finals of the men's 100 meters T54 category.

Teye Narh, faced a stiff competition in the contest, that was won by Liu Lei of China who apparently made a new Paralympic and World records with 218kg in his first attempt and 226kg in an optional fourth attempt.

The Chinese, who entered the competition with both Paralympic and World Records, ensured he broke those records and set new ones to the surprise of fans at the venue.

Liu, broke his own record in the Paralympic Games by making a good lift of 218kg, in his first attempt and failed to lift succesfully in his second and third attempts but he did not give up as he made use of an optional fourth attempt to lift 226 kg to realise his dreams of setting two new records with just a lift in the Powerlifting competition.

Rostan Roohalan of Iran won the silver medal with his best lift of 208kg, as Ibrahim Shaban of Egypt, went home with a bronze medal with a good lift of 202kg.

I don’t know him – Afoko denies knowledge of prosecution wit...
16 minutes ago