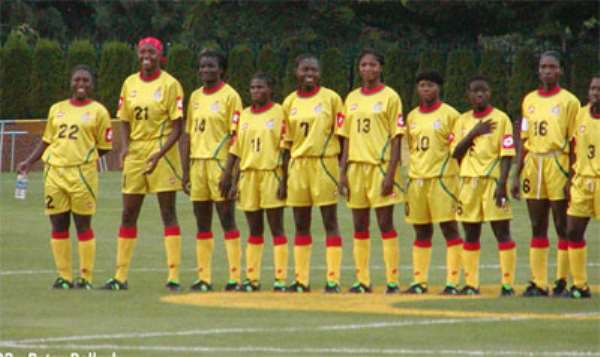 The Black Queens of Ghana marvel at the seemingly endless expanse of immaculate grassy fields, neatly trimmed and meticulously lined with white chalk. On the sidelines cool water fountains await their mid-practice thirst. For soccer players accustomed to fighting for a space on a gravel pitch, these luxuries are astonishing.

In Portland's middle-class suburbs, the Ghanaian women's national team is quietly preparing for a World Cup tournament and, for the first time, experiencing women's soccer American-style.

After watching the Black Queens struggle to compete in the 1999 Cup, a Ghanaian businessman living in the Oregon city, Simon Osei-Agyemang, approached a local soccer club about hosting the team, lobbied the Ghanaian Soccer Federation for funds and asked Portland's Ghanaian community to help underwrite the women's pre-Cup preparations.

Seeing the level of support and enthusiasm for women's soccer in the U.S. has been awe-inspiring to the Ghanaian players, says Alberta Sackey, the team's captain.

"We see that the girls have soccer in schools. They have youth clubs, and parents cheer their kids on the sidelines," she says.

Like the Nigerians, the Ghanaians see themselves as a talented team that hasn't realized its technical potential. Hamstrung by a lack of support from their national federations, both African teams struggle to recruit, fund and train players for the World Cup stage.

The Africans' challenges are emblematic of the pitfalls many of the international teams face in garnering investment and recognition for women's sports — a problem which largely defines their chances of making it beyond the first stages of the Cup.

But the divide between the inner sanctum — the top 10 teams in the world including the USA — and the rest of the Cup's competitors is not necessarily determined by economic stature.

Although wealthy in comparison to most of the Asian, African and Latin American countries represented in the Cup, Australia is ranked 15th behind teams such as China and Brazil, and the Matildas have never won a World Cup or an Olympic match.

At last year's Nike games, some players complained after they were given the Australian men's team's hand-me-downs to play in — an embarrassing spectacle for the players who were swimming in shorts that hung to their knees.

Canada, rated by the United Nations as the country with the best standard of living in the world, has stalled in providing its women's soccer team with a sufficient budget, finally agreeing to hire a full-time coach and support staff just two years ago.

Norwegian native and current Canadian coach Even Pellerud says that concession only came about after he refused to take the job without the appropriate resources to do it well. The Canadian example should prove to skeptics that investing in women's teams will deliver dividends, says U.S. national team coach April Heinrichs.

The North Koreans are perhaps the best example of a comparatively poor country that has taken the lead in supporting its women's team. Politically troubled, isolated and the second poorest nation represented in the Cup, North Korea has nonetheless managed to unseat powerhouse China as the reigning Asian champion three times in a row.

Heinrichs credits North Korea's improvement to its aggressive recruitment and residency program where players train year round on a daily basis.

"Many federations have a litany of excuses as to why they don't put resources into their women's teams. When any leader or administration says, 'We don't have the resources,' the translation is: It's not a priority," said Heinrichs.