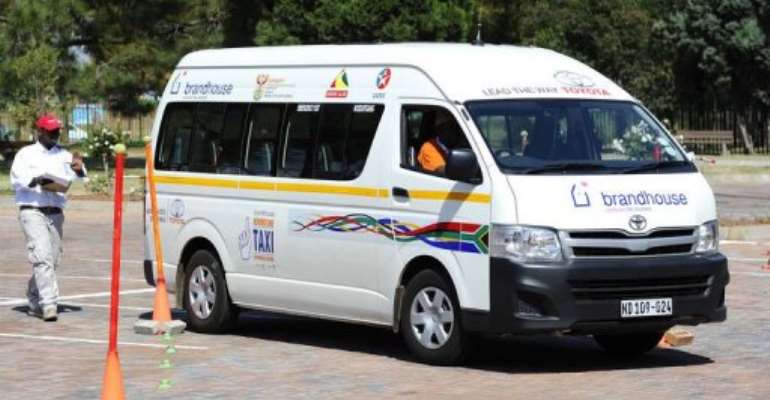 Almost fourteen thousand people die on South Africa's roads each year - one of the highest rates in the world. By Stephane de Sakutin (AFP/File)

In a country with nearly 14,000 road deaths a year -- one of the highest rates in the world -- minibus taxis are often blamed for the carnage.

One driver in February was sentenced to prison on murder charges, for killing 10 children in a minibus-train crash after he ignored a lowered safety boom at a railroad crossing.

But one competition is attracting thousands of drivers hoping to improve the taxis' reputation and avoid such deadly accidents: a contest for the title of South Africa's safest driver.

"We are learning how to take care of our passengers. We are learning also how to save ourselves," said driver Molupe Leboto, 29, at a session in Germiston, near Johannesburg.

Behind him a fellow driver in a bright orange t-shirt does manoeuvres between traffic cones while others wait in the shade.

They take turns reversing and parking on an obstacle course while an instructor evaluates their skills. Then they take to the streets for a road test.

More than 5,000 drivers are competing in the Number 1 Taxi Driver Campaign, hoping to win one of four spanking new minibuses of their own in a contest meant to teach advanced driving, business skills and just simple manners.

"They're always rushing. Their bosses want money so they're working under very strict conditions and it pushes them to go over yellow lanes, to drive a little bit reckless and a little bit faster," driving instructor Sthembiso Segolela said.

Operators are frank about their shortcomings.

"They bend the rules sometimes, but the thing is if you do that once, or you do that twice -- many times it will cause an accident," said taxi driver Churchill.

The 30-billion-rand ($3.8-billion, 2.9-billion euro) industry, which ferries around 25 million people a day, suffers from an image that its drivers are all reckless, speeding and blaring horns through the streets.

They've also come under fire for abusing women who wear mini-skirts, and even knocking over pedestrians in road rage incidents.

"Road rage affects innocent drivers on the road. So that's what we're trying to discourage, so they could try to get a little bit of emotional intelligence so they know how to control their emotion," Segolela said.

On top of that pressures from competitors and passengers stress out conductors, who are paid by commission rather than by the hour, creating an incentive to carry as many people as quickly as possible.

"They used to get angry very fast. As they're customers, it is patience I need to have most," said driver Musa Mndebele, 35.

In an industry with many illegal operators, the campaign encourages regulation by requiring contestants to have a drivers' licence and public transport permit.

Authorities support the campaign, which is sponsored by Brandhouse, a drinks distributor for labels like Johnnie Walker.

"They protect the very commuter, because that is where our bread comes from," said Francis Masitsa, chairman of the National Taxi Association, whose members account for 40 percent of minibus operators.

But more is needed than 30 minutes with an instructor to turn the tide.

A taxi academy was launched last year by the South African Taxi Council, the other major industry association, but it has yet to get off the ground.

Meanwhile road safety officials have set up roadblocks on provincial borders around the country and courts have meted out severe punishment for taxi drivers responsible for road deaths.

The driver in the train crossing accident was jailed for 20 years.

Census: People suspect us to be armed robbers, some attack u...
22 minutes ago