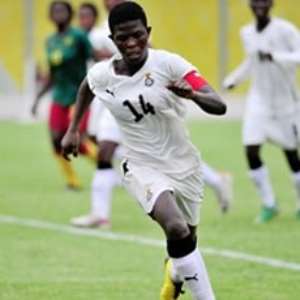 Ghana played out a goalless draw against South Africa in the first leg of the final round of qualifying for the FIFA U-17 Women's World Cup.

The Black Maidens now have to win the return leg at home in a fortnight to seal their place in the finals to be hosted by Azerbaijan later this year.

Coach of the women's U-17 team, Mas-Ud Didi Dramani was happy with the performance of the Black Maidens and believes they hold the advantage now.

It was game of two halves as Ghana dominated the second half and kept goalkeeper Katlego Moletsane very busy in the first 20 minutes after the break.

“We played well against South Africa but they were very good tactically and came at us strongly,” he said after the game at the Sinaba Stadium in Daveyton on Saturday.

“They gave us a very strong challenge. I am however impressed with the quality of women's football on the continent as both sides played good football – it's just a pity there were no goals.

“I believe we have an advantage going into the second leg at home. We know what we must do to win and ensure we book ourselves a ticket to Azerbaijan.”

The Black Maidens are chasing one of the three final slots for places in Azerbaijan 2012.

Qualification to the World Cup will make it a third successive appearance for Ghana on the world stage.