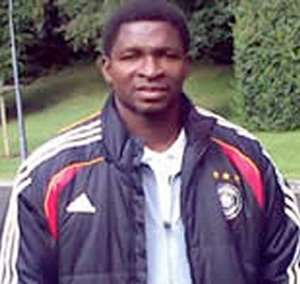 New Edubiase yesterday ended Asante Kotoko's eight-match unbeaten run when they stunned them 1-0 in their midweek clash at the Gyamfi Park, Bekwai.

It was Emmanuel Baffoe who registered the only goal of the game, underlying his scoring prowess and increasing his tally in the competition to nine goals.

He shot diagonally with goalkeeper Soulama Abdulai having no clue to the strike, 13 minutes to the end of the first half.

The Porcupine Warriors fought tirelessly to redeem the solitary lead but former Kotoko keeper Eric Nii Baah and the Edubiase rear denied them.

And in one of their surges in the second half, Michael Akuffo stamped Sakyi Quaye in the lower abdomen which stirred referee FB Bortey to show him the exit in the latter stages of the game.

Their numerical disadvantage did not have any telling effect on them as they kept probing the home side's vital area.

An opportunity presented itself for Hearts of Oak to overtake Kotoko at the summit when they hosted Aduana Stars at the Accra Stadium.

Striker Mahatma Otoo had the chance to put the Phobians in front but he failed to convert a spot kick before the break.