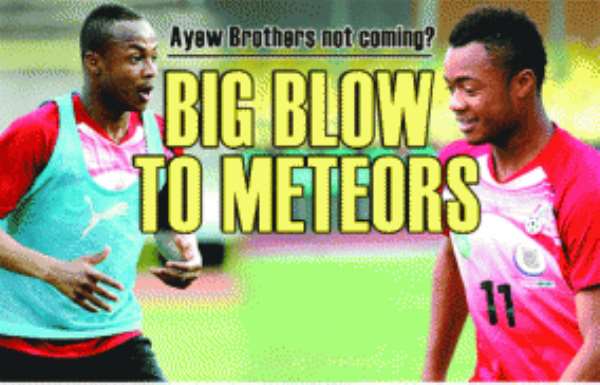 Kwasi Appiah has been forced to rethink his strategy to get his national Under-23 football side, the Black Meteors, to beat Nigeria next week without the Ayew brothers — Andre Dede and Jordan.

The Meteors must overturn a 1-3 deficit against the Nigerians when they host the second leg of the All Africa Games (AAG) final qualifying match and Coach Appiah will need all hands on deck to execute his plan.

However, he will have to count the two brothers out as they have been asked to return to their French club, Olympique Marseille, to prepare for their pre-season training.

Captain Samuel Inkoom, Emmanuel Agyeman Badu, as well as Daniel Addo, are all being recalled by their foreign clubs, but while there is the assurance that Inkoom and Agyeman-Badu will return in time for the game, same cannot be said of the Ayew brothers as their club are relunctant to release them.

This latest incident adds up to the number of times Marseille have refused to release the Ayew brothers for national duty with the junior sides.

Dede Ayew faced similar problems in the intial stages of the 2009 Under-20 side which played the qualifiers without him but eventually captained to win both the Africa and world titles.

Jordan was also refused permission by Marseille to join the 2011 Satellites during their campaign in the 2011 African Youth Championship.

While Marseille are obliged to release players for national duties particularly for the senior teams, there is no such mandatory clause for the junior teams.

Team manager of the Meteors, Sabahn Quaye, confirmed to the Graphic Sports that the development had forced the technical team to revise their strategy but maintained that ‘it was nothing they could not contain.’

“ Yes, losing Jordan and Dede is unfortunate, but all hope is not lost. On they day we will assemble 11 good players who can carry out the task ahead,” Sabahn Quaye maintained.

“ Inkoom is determined to lead the team to qualify for the AAG and will definitely return, there is no cause for alarm,” he assured.

He also said Opoku Agyeman, who was injured during the first leg has recovered in time to rejoin the team, while Saddick Adams who scored the Meteors’ goal against Sudan in Omdurman during the Olympic qualifiers is also back.

Latif Salifu, Ben Acheampong, Malik Akowuah and Aziz Tetteh have all joined the team who began their training at the Ohene Djan Stadium Thursday.

Inkoom is so keen to lead the Meteors to save what is left of Ghana’s image on the international scene this year that, even after the loss to Nigeria in Benin City last Saturday, doled out $10,000 to the team to motivate them for the second leg and promised to do same if they win next week.