Rooney, Lampard, Terry and others out of Ghana game 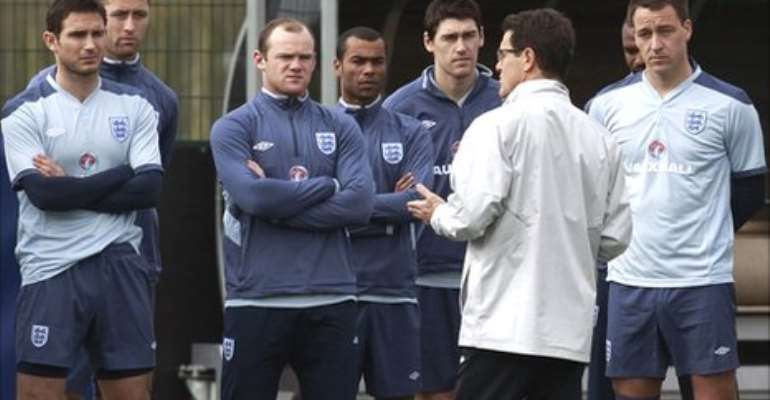 
England have released five players from the squad for Tuesday's international friendly with Ghana.

In addition to the released players, Kyle Walker has returned to Aston Villa after being ruled out of the game with a groin injury.

Capello's decision to release Terry means that the coach will have to appoint another captain for the match against the Black Stars just one game after the defender's return as skipper.

Manchester City midfielder Gareth Barry played no part against Wales and, having worn the armband in the friendly against Denmark in February, could skipper the side on Tuesday.

The quintet should feature in next month's Champions League quarter-final ties, in which Spurs face Real Madrid on 5 April and Chelsea play United at Stamford Bridge the next day.

Dawson's Spurs team-mates Peter Crouch, Jermain Defoe and Aaron Lennon will stay with the England squad and are likely to feature against Ghana.

Scott Parker had a fine game against Wales playing in a holding midfield role, alongside Jack Wilshere and Lampard.

It was part of a 4-3-3 formation and the West Ham captain is keen to establish himself in the England team on a permanent basis.

"I got 45 minutes against Denmark, and I thought I did well, and it has gone well personally again against Wales," said Parker.

"I just need to keep the form up and hopefully get a bit more of a chance.

"There is a lot of competition but I do feel I have been in some really good form this season.

"I thought the midfield combination worked pretty well. It is easy for me when you are playing with two very good players in Lamps and Jack.

"It gives them licence to go forward a little bit and it makes life easier for me."

Darren Bent scored England's second goal at the Millennium Stadium and has now found the net in his last three internationals.

"It's always hard when you've had 10 minutes here, 10 minutes there but when you get a run in the side, you take great confidence from that," said the Aston Villa forward.

"I'd love to be the number nine for as long as possible but there are a lot of top strikers about."

No petty trader will pay income tax in my next gov't — Maham...
13 minutes ago