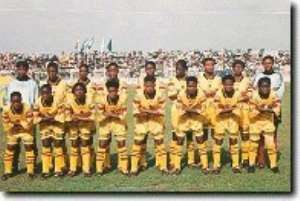 The Falcons and the Black Queens of Ghana are the top two sides in West Africa and arguably in the continent. The two sides qualified for the last Fifa Women's World Cup in the United States after a confrontation in the final of the Nations Cup four years ago in Abeokuta. Nigeria have been dominating African football for almost a decade and have had the upper hand over the Black Queens. They retained the African title two years ago in South Africa, who were seeded in the other group for finishing as the runner-up in 2000. The South African ladies, Banyana Banyana, may have avoided Ghana and Nigeria in the draw but their task not at all easy with the highest scoring side Zimbabwe, the much improved Cameroon, and newcomers Angola to play. The Nigeria-Ghana group is complete with two other debutants, Mali and Ethiopia, who seemed to have been condemned for a baptism of fire. The Nations Cup will take place from 7 to 21 December this year. The two sides who reach the final will play in the Fifa Women's World Cup in China from 24 September to 11 October 2003. Full draw and fixtures: Group 1: Nigeria, Ethiopia, Mali, Ghana 07/12/02: Nigeria v Ethiopia, Mali v Ghana 10/12/02: Ethiopia v Mali, Ghana v Nigeria 13/12/02: Ethiopia v Ghana, Nigeria v Mali Group 2: South Africa, Cameroon, Zimbabwe, Angola 08/12/02: South Africa v Cameroon, Zimbabwe v Angola 11/12/02: Cameroon v Zimbabwe, Angola v South Africa 14/12/02: Cameroon v Angola, South Africa v Zimbabwe Semi-finals: 17/12/02: Winner A v Runner-up B, Winner B v Runner-up A Third-place Play-off 20/12/02: losers of semi-finals Final: 21/12/02: winners of semi-finals