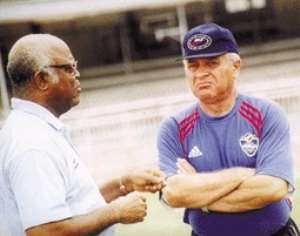 THE Ghana Football Association (GFA) has turned down the resignation of errant Black Stars coach Millan Zivadinovic, citing the reasons for his action as “ untenable and unacceptable”. In a bold and defiant demeanour, the GFA last Tuesday moved a step from its petition to FIFA barely a week back to demand the immediate return of Zivadinovic to post. Reacting to the coach’s continued absence from the Stars’ job for which he has been contracted, the FA gave the Yugoslav a 10-day ultimatum to assume duty or be referred to FIFA for damages for breach of contract. In a letter dated October 1, 2002, and signed by the GFA chairman Mr Ben Koufie which was copied to the chairman of the FIFA Players’ Status Committee and the Yugoslavia Football Association, the FA pointed out that it had provided all the support and facilities Coach Zivadinovic needed to carry out his obligations under the contract. The FA drew strength from Clause 7 of the contract to open a fresh chapter to the case, stressing that the Yugoslav coach had not informed it in writing of any grievance he had, as required under the clause, and could not therefore opt out of the contract. According to Clause 7 on grievances in the contract: “If the coach is aggrieved by any matter in relation to his employment, he shall state his grievances in writing addressed to the chairman of the Association or whoever is acting in that capacity who shall take all reasonable steps to address the grievances of the coach if they are deemed to be grievances or breach of this agreement”. It is within that context that the FA found the reasons assigned by coach Zivadinovic for his resignation as “untenable and unacceptable”. “Your conduct amounts to breach of faith, abuse of trust and blatant attempt to cheat. We hereby demand that you assume duty as the head coach within 10 days of the date of this response”, the letter revealed. Feeling very cheated but not prepared to see about ¢520 million go down the drain, the FA referred Millan to the fact that “there are several Yugoslavs and other nationals of Eastern European origin who have worked and continue to work in the country without any adverse climatic effects on their health”. In much the same way as the Yugoslav appears to exploit another clause in the contract to the effect that either party could opt out within six months, the GFA capitalises on Clause 7 which demanded that the coach disclosed any grievances to the local soccer governing body and not resign as he did. “The Ghana Football Association (GFA), having provided all the support and facilities you require to carry out your obligations under the Contract, has not been informed in writing of any grievance you have, as required by Clause 7 of the Contract”, it emphasised.