Bombers back with 9 medals 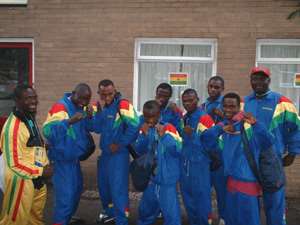 Benin, who paraded two separate teams, had their first team placing second to Ghana while the other was relegated to the fourth position by Burkina Faso. Togo and Liberia shared the fifth and sixth positions respectively. In all, five out of the expected eight countries took part in the sub-region's biggest boxing fiesta, which has a strong Francophone dominance.

While Niger's absence is seen as a continuation of their inability to assemble a formidable squad for the event, Cote d'Ivoire was said to have missed out of the show due to the current political tension in the country.

Nigeria, the third Anglophone country apart from Ghana and Liberia, failed to honour the invitation apparently due to fear of experimenting with a local team. Nigeria has most of her crack amateur boxers resident abroad and could not gather them for the games.

The Bombers emerged the overall winners of the zonal competition in spite of going through certain unexpected problems soon after arriving Cotonou.

The Ghanaian squad who would have encountered serious problem with regard to boarding and lodging were, however, rescued by the Ghanaian mission in Cotonou who stepped in to help until money was sent from Accra to solve resolve the problem.

The Chairman of the GABA, Mr Eddy Duplan, who expressed his happiness with the Bombers' performance, noted that the exposure the boys got at the Manchester Games has polished them greatly and added "if more of such exposures are given to them they will become stars in no time."

He said the strength and agility the boys displayed during the competition made them more dazzling, adding that the zonal tournament will certainly mark the turning point of the boxers preparations for the All Africa Games in Abuja, Nigeria.

According to Mr Duplan, work on the stamina and style of the boxers has started in earnest, while his outfit is seriously pushing for trips outside to get the needed exposure for the boys.

He explained that it is the desire of the association to move beyond the West African sub-region to places such as Poland, Uzbekistan and South Africa where serious competitions are available for the boys.

He added "there seems to be a slight problem in the super heavyweight division. However, we are doing our best to mould one for the nation to complete the strong Bombers squad that we want to build."