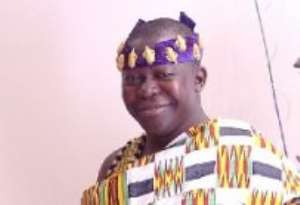 Otumfuo Osei Tutu II, Asantehene, at the week-end defied heavy rains to give moral and spiritual support to the senior national team, the Black Stars during their training session at the Baba Yara Sports Stadium in Kumasi.

The Stars play their Benin counterparts in a FIFA World Cup/Africa Cup of Nations qualifier on Sunday.

No sooner had the Asantehene arrived at the stadium when the rains started but he stood his grounds, defied the downpour and interacted with both the handlers and the playing body.

Otumfuo Osei Tutu told the team that the whole of Asanteman and the entire nation were solidly united behind them and expressed confidence that they would not disappoint.

He said he recognizes the tremendous contributions of the Stars through their dazzling performances on the football pitch which he noted has made them to lift high the image of the country.

The Asantehene advised the players against complacency and asked that they approach all the qualifying matches with seriousness, determination, dedication and strong sense of discipline.

Skipper Stephen Appiah said they had been inspired by the Asantehene's visit and were not going to let the nation down.

“We have every reason to believe that with Otumfuo's support we would go to places”.

Appiah said the players and their handlers were well-focused on the job they had on their hands and appealed to the fans to back them with their prayers.