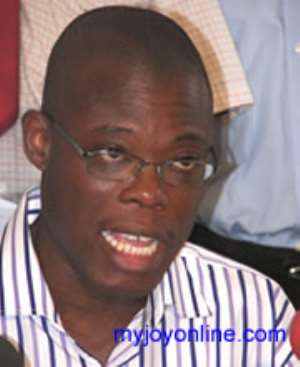 The vetting of Fiifi Kwetey one of two deputies to the Finance and Economic Planning Ministry by the Appointments Committee of Parliament was expected to be dramatic, thrilling and controversial and it did live up to expectation.

The deputy minister designate was treated to a grueling four hours of witty, brain-cracking question and answer session and it was understandable.

As the propaganda secretary of the then opposition NDC, Fiifi Kwetey under the platform of a committee to set the record straight and some newspaper publications made several allegations against the then Kufuor government, some of which were damning.

It was pay back time especially for the minority side of the committee as they bombarded him with questions of his nationality, educational and professional background, and his controversial political sentiments.

But the deputy minister designate showed little signs of buckling under pressure.

But the minister designate explained he had no choice but to begin his O' Level in Form Two after several attempts to continue from Form Four failed.

According to him, the headmaster of Bishop Herman at the time insisted he started from Form Two because of his paucity in the English language.

Atta Akyea, MP for Abuakwa, described as palpably false allegations that the Kyebi office of the NDC was burnt into ashes and one Abu Mohammed, an NDC functionary, was crippled as a result of a resounding beating by “thugs” alleged to have been hired by Nana Akufo-Addo and demanded evidence to the contrary.

He however admitted as untrue allegation in the Lens newspaper that the NPP government sold all the gold reserves in the country and duly apologised.

Fiifi was the managing editor of the newspaper.
The deputy minister designate is hoping to challenge the status-quo in the country's economy and to bring freshness in the area of finance and economic planning.

He conceded his nomination and subsequent confirmation will serve as a learning curve for him.

He was not surprised by attempts to question his competence in the area of Finance and Economics, explaining those critics were not aware of his background.

He gave the assurance he will work assiduously to maximise and prioritise revenue to the benefit of the country.

Addressing the question of corruption posed by ranking member E.T. Mensah, Fiifi Kwetey lamented tax evasion by importers and pledged all loopholes will be blocked.

He called for a bi-partisan approach in dealing with the issue of micro-financing, adding monies must be given out to people on the basis of their ability to pay back.

Ho West Tension: Killer Reports Himself To Police
26 minutes ago