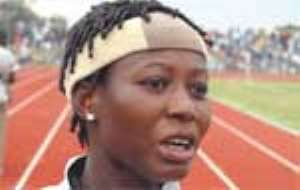 The Ghana Football Association (GFA) on Wednesday confirmed the kick-off time of the women's Olympic qualifier between Ghana's Black Queens and the Bayana Bayana of South Africa at the Ohene Djan Stadium on Sunday at 17:00GMT.

The Black Queens remain in contention of picking a place at the Beijing Games to mark their debut in the maiden women's football event at the Games.

Ghana top the group after recording two victories with wins against Nigeria's Super Falcons at home and the Bayana Bayana away.
The Bayana Bayana is expected to arrive in Accra today for the game on Sunday.

Meanwhile, Black Queens striker, Anita Amankwah has been suspended by the GFA for gross indiscipline.

According to an FA statement, the disciplinary action takes immediate effect.

The decision to suspend the youngster means she misses Sunday's home game against South Africa in the Women's Olympic qualifying series.

Anita Amankwah has departed the squad preparing for the game at the national camp in Prampram after being served with the letter of suspension. Ghanafa