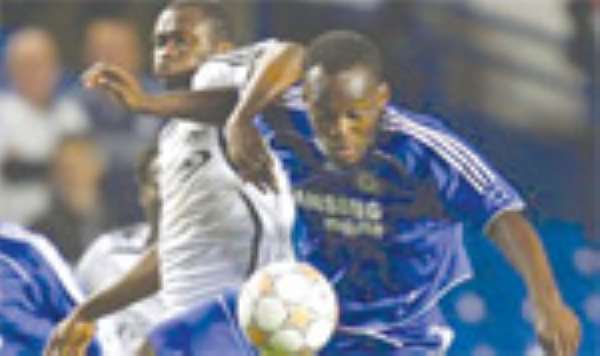 Ghana's midfielder, Michael Essien could win a successive BBC African Footballer of the Year Award after being named in the five-man shortlist for the award.

The five-man shortlist for the 2007 BBC African Footballer of the Year award was announced yesterday. The Chelsea player won the 2006 title.

Essien has been nominated alongside his Chelsea colleague Didier Drogba and Arsenal's Emmanuel Adebayor.

The Spain-based duo of Mali striker Frederic Kanoute (Sevilla) and Cameroon star Samuel Eto'o (Barcelona) have also made the list.
The shortlist was drawn up through consultations with sports reporters from every country in Africa.

According to the BBC, organisers of the awards, each reporter, from Morocco to Mozambique, from Somalia to Senegal, was asked to provide a list of five names.

“Adebayor, Drogba, Essien, Eto'o and Kanoute received the most votes from our panel. However the public would decide the rest by voting via the network's website to help us choose the winner of this prestigious award,” BBC said.

Readers can text their choice, by sending the word "vote" followed by the player's surname to +44 77 86 20 20 25. Multiple votes will be automatically discounted.

The winner will be announced at a special ceremony in Accra, Ghana on 1 February, after the completion of the group stages of the Africa Cup of Nations.