By Wikipedia, the free encyclopedia 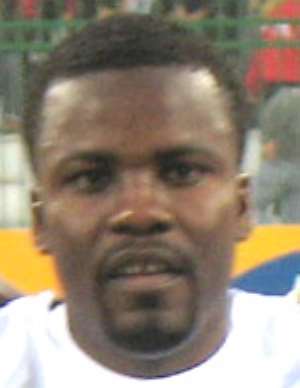 Samuel Osei 'Sammy' Kuffour (born September 3, 1976 in Kumasi, Ghana) is a football defender for Livorno. Arguably the greatest African defender of all-time, Kuffour is known for his great power and tactical awareness as well as a physical presence and nous to unsettle the strongest of attacking players. A Ghana International for 13 years, he won his 1st Cap as a 17-year old when Ghana played Sierra Leone on 28th November, 1993. He has also been part of every Ghanaian national team, at Junior, Youth and Olympic level. He was captain of Ghana at 23 years.

Kuffour burst onto the International scene as a young talented 13-year old defender. At Junior level, Kuffour was a member of the victorious Ghana side that won the 1991 FIFA U-17 World Championship in Italy and the Ghana team that was runner-up to Nigeria in the 1993 FIFA U-17 World Championship in Japan. At Youth level, he was part of the Ghana Youth team that was runner-up to Brazil during the 1993 FIFA World Youth Championship in Australia. At Olympic level Kuffour became the youngest Olympic Football Champion of all-time, when he pocketed bronze at the 1992 Olympics with Ghana just before his 16th birthday. He was also a member of the Ghana team that made the quarter final at the same level in 1996.

Kuffour was brought to Europe by Torino F.C. aged just 13 after playing junior football for local teams in his native country. He joined FC Bayern Munich in 1993 from the Italian club as a 17-year-old and after a loan spell with 1. FC Nürnberg in 1996/97 he made his breakthrough at Bayern.

A Fifa World Class defender, Kuffour spent 11 seasons with Bayern Munich, raising from the ranks of youth team to a prominent team member who lifted the Champions League with the club. He was an integral part of the Bayern squad that won the UEFA Champions League 2000-01 and he scored the winning goal in the 2001 Intercontinental Cup and was named man of the match.

After eleven seasons at the Olympiastadion, and 175 Bundesliga appearances, Kuffour left Bayern in the summer of 2005 to return to Italy with AS Roma and signed a 3-year-deal with A.S. Roma in free transfer, summer 2005. But his second year was loaned to UEFA Cup competitor, Serie A team Livorno. He made 21 Serie A appearances in 2005/06 having spent a period of the season away with the Ghanaian national side in the African Cup of Nations and made one appearance for his country at the 2006 FIFA World Cup finals, against Italy.

After a costly mistake in the first match of Ghana's FIFA World Cup 2006 2-0 loss to Italy, Kuffour was dropped for the 2-0 win over the Czech Republic, Ghana's second fixture, and for the 2-1 win over the USA.