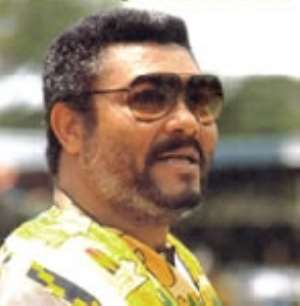 About 73 representatives of Ghanaian students studying in more than thirteen universities in the United Kingdom have issued a statement in London, pleading with former President Jerry John Rawlings to stop giving the country he ruled for 19 years until January 2001, a bad name internationally.

The press conference, which took place at the Dominion Hall, Wood Green, North London, was addressed by the leader of the students, Stephen Amoah, who was accompanied by 30 of the representatives.

The press conference, they said, was to address some issues which they felt had the "potential to tarnish the good image of our dear country, Ghana. Typically, some issues raised by our former president Mr Jerry John Rawlings whiles addressing students at the South Bank University here in London on Tuesday 24th of October, 2006 in which he attacked the integrity of the Ghana government, judiciary, leaders of some western countries, international media and other statements we consider as highly tribal."

"It is not in our best interest to attack or condemn our ex-president, but to exhibit our intellectual responsibilities by addressing issues of national importance without any prejudice," they assured the gathering.

"As part of democratic process," the foreign-based students stated, "elections are held and naturally, some lose others win. However, it is important that after all these, a period of peace ensues and the nation's energies are concentrated on building the happy and prosperous nation that we all desire.

"We want to believe that Mr Rawlings can join hands in overcoming the challenges that confront Ghana as a nation rather than make them an international political propaganda tool," they said.

It was an unusual occasion to have Ghanaian students scattered across the academic landscape of the UK gathered together to address a single issue, perhaps underlining the relevance they attached to what they saw as the former President's tendency to undermine the national effort to progress.

"We are advising our ex-president to refrain from being over passionate and raising issues that will undermine the peace and stability Ghanaians are enjoying. It is expected of him to raise issues that will unite Ghanaians and preserve the good image of Ghana. It will do Ghana good if the use of 'uprising' in your statements could be well managed in the right and peaceful context that will not stir up public reaction. We have come too far to return."

They are asking Mr Rawlings to be mindful of party-politicising "the good working relationship between Ghana government and other developed countries such as the United States and the United Kingdom which was raised during his address."

They stressed, "We believe strongly that, the relationship has not emerged as a result of the name NPP or Kufuor's government, but the good socio-economic policies and the achievements of the Ghana government," the students stated.

But the students, who describe themselves as non-partisan concerned citizens abroad, did not stop there. They also spared some of the advice for President John Agyekum Kufuor.

"To the sitting President, we plead with you to be more tolerant and eschew any choice of retaliatory words or action that will hamper the peace and the tranquility the nation is already experiencing."

Speaking to The Statesman yesterday, Mr Amoah, an MSc student in Strategic Financial Management at Derby University, observed that for the Ghanaian students abroad who make the extra effort to access more general information on Ghana, they are encouraged by the progress being made in the country, but many others are easily persuaded by the negative propaganda. They are calling for more constructive criticisms and better explanations of issues from the government.

They said Ghana is winning great ratings internationally because it is seen by the rest of the world as a model of countries pursuing "good governance, nations that are making the effort to root out corruption, respect for human rights, adhere to the rule of law, sustainable budget policies and good national trade policies."

Listing some of the things that make them proud abroad as citizens of Ghana, the Ghanaian students abroad mentioned the decision by President Kufuor to make Ghana "the first country in Africa to open its door to the African Peer Review Mechanism (APRM)."

They argue, "For an African leader to exhibit this unprecedented leadership style shows a sure sign of transparency and accountability."

The students also cited the economy as a major testament that the country is on a forward march and needs to be protected and promoted, accordingly.

But, it was not all praises for the way things are: "However, it does not mean all is well with Ghana or this present Ghana government is without blemish or the past governments never did anything good in their time."

In their view, "If the development of Ghana is allowed to continue the trend it has taken, the future of the nation would be very successful."

They also urged the government to "step up its management and leadership style in ensuring the strategic configuration of the key state resources and core competences so that [a] conducive and economically viable environment can be set up to encourage the youth abroad with diverse expertise to come home and contribute their quota."

Mr Rawlings had criticised corruption in the judiciary, too. "On judicial corruption, we concede the occurrence of instances that suggest so, but we are also aware that on its own initiative, the judiciary is weeding out bad elements to enhance its image. Budgetary allocation and conditions of service are also being improved to underpin its independence, coupled with the provision of the fast track high court, commercial courts and an appreciable infrastructural undertaking to ease overloading and expedite the judicial processes."

Still on graft, "There is no doubt about the fact that there is still a high perception of corruption in Ghana." Though encouraged by the various anti-graft laws passed, "we are admonishing the government to make them more functional as the perceived corruption is still a challenge to the government."

Again, "Ethnicity and Tribalism that are being extremely used as conspiracy tools in the contemporary politics of Ghana is being done at our own peril. Liberia and Cote d'Ivoire are typical examples of countries that have suffered civil wars as a result of tribal politics. We urge all Ghanaians irrespective of where [they] were born to refrain from any ethnocentric behaviour that can undermine the stability, unity and the peace of this peace-loving country. We admonish the religious bodies in Ghana to intensify their prayers and campaign against such behaviours at all levels in the Ghanaian society. We are all one people and one nation."

Their special message to Ghanaian youths, especially, is to be very circumspect in judging issues and taking decisions. "We should go all out to give precedence to the nation when issues of national concern are being dealt with. It will be more prudent to tackle national and political issues devoid of any prejudice. Let honesty drive our sense of judgement. It is time we all got involved in national issues and defend[ed] the truth rather than making decisions out of lies and deceptions. We are holding the steer of the future of this nation. The amount of effort we put in and the direction to which we drive it today will determine the future of Ghana," they stated.

"No government will govern Ghana or has the presidential seat in perpetuity. It has to be acknowledged that Ghana is more important and greater than any particular government or leader. After all, leaders, past and present, came to meet Ghana and will leave Ghana behind."